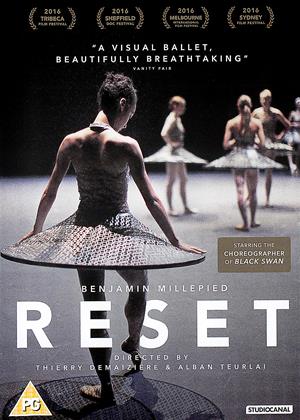 Synopsis:
A young and notorious American, former ballet dancer in the New York City Ballet and star and choreographer of Black Swan, Benjamin Millepied is about to dramatically shake up, upset and rejuvenate the prestigious French institution, l'Opéra National de Paris, as he prepares to unveil his first ballet. From initial rehearsals until opening night, Reset is immersed in the world of the Paris Opera where we discover the hard work and raw talent, as well as the ambition, rivalry and jealousy which prospers behind the scenes. As a new force prepares to reckon with an institution whose traditions have been forget over centuries, the audience hold their breath.
Actors:
Benjamin Millepied
Directors:
Thierry Demaizière, Alban Teurlai
Aka:
Relève: Histoire d'une création
Studio:
StudioCanal
Genres:
Documentary, Performing Arts
Countries:
France

Natalie Portman’s rougher half Benjamin Millepied stars in a documentary feature depicting a dozen ballet dancers whose only purpose is to viscerally amaze the audience. And boy do they succeed in doing so. Reset is as vibrant as it’s inherently perceptive, lending its own troupe’s elastic qualities to the arts along with its soul, mind and body. Beautifully shot and masterfully edited, it’s a true shame that Reset probably won’t escape the confines of an enclosed space in which these artists operate. And for the uninitiated in the ways of the world class ballet – Reset would only graze the surface of what is known as true art.

Reset is directed by Thierry Demaizière, Alban Teurlai and follows Benjamin Millepied during his tenure at one of the oldest ballet groups in the world - the Paris Opera Ballet at the Opera National de Paris (for reference, it was founded in 1689 and still going strong).

The film is mainly focused at Mr. Millepied’s choreography and how seemingly innocent, able-bodied dancers transform into inhumanly vicarious predators of music and sound, carefully planning their next move as if a true embodiment of the fastest, most gracious hunters in an imaginary jungle of hunters and prey.

Needless to say, it’s beautiful for the eyes and touching for the heart.

And walking on the shoulders of giants such as Rudolf Nureyev and Serge Lifar, Benjamin Millepied takes its role very seriously, although his main credo involves the enjoyment of everyone involved.

However, deep underneath everything that’s taking place, the selection process eerily reminds one of an elite war training camp where even the slightest mistake can become a costly rejection, or even cost you your life. While the lives of that various dancers are not at stake, we see how they purposely hide injuries in fear of rejection, which more often than not – can mean the end of a prospective career if not treated in time.

No pain, no gain.

And so, a tremendous amount of detail is put to good use when we see the end product, choreography worthy of admiring and so hard to pull off that it almost feels godly unique. Benjamin Millepied had tough shoes to fill, but thanks to countless sleepless nights and a stoic dedication to his craft - he succeeded in his mission nonetheless: to sift through countless obstacles in order to reap the cream of the crop when it comes to his dance pupils.

Ultimately, Reset probably won’t see the light of day among your typical superhero moviegoer who doesn’t care about the craft of film-making enough to appreciate the sacrifice these people go through; to begin with - the audience for these type of musical/documentaries is already walking on thin ice, so no losses there.

For everyone caring enough however: you’re in for a treat.