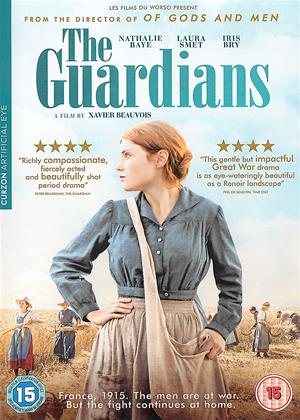 Reviews (4) of The Guardians

A visual treat - The Guardians review by TE

The spirit of Thomas Hardy lives on in this quietly epic tale of love and continuity in rural France during the First World War.

The cinematography is brilliant, with scene after scene capturing the feel of the best French landscape painting. This is supported by careful attention to detail in the hard farm work that provides a constant backdrop.

After all the WW1 commemorations of the last 4 years, it is refreshing to see a film about the lives of the women who kept things going back home.

Waiting. - The Guardians review by RhysH

The dream sequence which shows shooting and killing is the least effective in portraying the horror of war. The reality of war is reflected in the lives of the people left behind, they can do nothing but wait and wait and quite often despair.

The three leading actors at the heart of the drama, Nathalie Baye, Laura Smet and in particular Iris Brey are outstanding.

The film is suffused with powerful acting and is beautifully shot.

Slow but I like slow so that's ok for me. - The Guardians review by DW

Modern slow-moving films intended for International distribution invariably have minimal dialogue in order to make them entirely compatible with sub-titles: good news for me because I can now enjoy a wide range of non-British films. (Consequently, it's become clear to me that "same old, same old" British films are being left behind in terms of entertainment value).

Minimal dialogue leans heavily on the need for more expressive & interpretive acting: this film is a strong example. From the audience's point of view, we're required to "understand" the film by closely watching the actors (rather than listening to them) & make our own judgements as to the message we're being given. A most enjoyable experience.

The ending felt like the end of a chapter but not the end of the book so I was happy to be left with my own ideas of what subsequently happened to who, when, why & how: a sort of thought provoking after-film guessing game.

The beasts of the field - The Guardians review by CH

A slow and understated French film that relies on wide camera panoramas, framed interiors and still portrait shots. Absolutely beautiful. The main character is a version of Thomas Hardy's Tess Durbeyfield (from Tess of the d' Urbevilles) a young woman seeking employment in a rural backwater of France during WW1. Her life becomes enmeshed with a farming family, harnessed into hard labour on the land, recently stripped of it's workforce of young men, now engaged in trench warfare with a faceless enemy. I am surprised that this film is not better known, I found it only by chance and will watch it again.