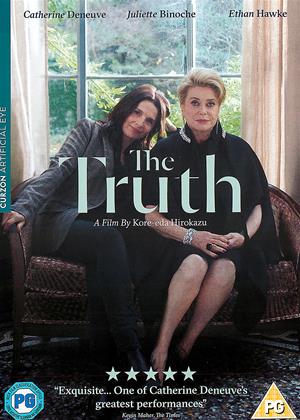 Reviews (9) of The Truth

A subtle masterpiece - The Truth review by PD

This piece, the first film by Hirokazu Kore-eda outside his native Japan, is a beautifully written drama in which a larger-than-life film-star diva — in this case, Catherine Deneuve — portrays a larger-than-life film-star diva. And Deneuve is utterly splendid as Fabienne Dangeville, a legendary French actress, now in her 70s, who approaches every moment with an 'I’m-still-here' tenacity which is at once steely and borderline tyrannical. Deneuve makes Fabienne a proudly narcissistic and theatrical glamour puss who has no patience for the idea that she should pretend to be anything other than the devious, self-adoring prima donna she is, although Fabienne is such a sly manipulator, so droll about her own royal ego, that we can’t help but feel drawn to her in a funny way. Kore-eda’s seamless dialogue is pitch-perfect throughout, suffused with the comedy of experience, and totally congruent with the cosmopolitan air of its French movie-world setting,

At the heart of the film is the relationship between Fabienne and her daughter Lumir, superbly played by Juliette Binoche, whose low-key but flawless performance is a perfect match for Kore-eda's sophisticated, subtle script. The heart of the film unfolds in Fabienne’s rustic suburban country home, where Lumir grew up, but as seemingly idyllic as the setting is, the memories are distinctly uncomfortable. Yet when confronted with the lies contained in her memoir, Fabienne offers no apology. It’s not in her nature to admit flaws; she maintains a tone of self-justifying blitheness. Fabienne speaks her mind to a fault, but after a while we realise that she’s never not acting. As the tensions mount, most films of this ilk would end build up towards an eruption of pain and confrontation, or (worse) to a soul-wrenching resolution involving copious tears and hugs. And many might feel the film that the film is weaker for not having these, but for the film is all the better for it - more believable, and ultimately more truthful.

There's some really effective touches, motifs and sub-plots, effortlessly woven into the action, notably the periodic detours to the set of the film Fabienne is shooting - inevitably, a mother-daughter drama, which offers a running commentary on the story we’re watching. Fabienne is actually cast as the daughter; that’s because the film’s sci-fi premise is that her sick mother went off into space (where you don’t age). So in many scenes, Fabienne plays a spiritual version of her own daughter: desperate, abandoned, reaching out to the mother she loves. It’s through this subplot that Kore-eda exhumes one of his oldest preoccupations: the permanence of film versus the impermanence of memory. Everything that happens between mother and daughter in the present is filtered through that past, and nothing in “The Truth” is more uncomfortably honest than the notion that families are cast much like films are cast; once people settle into their roles, it can become impossible to imagine them being played differently, or by anyone else. The beauty of Kore-eda’s film, despite its apparently light touch, is in the rhetorical way it wonders if it’s possible for people to separate themselves from those performances. A subtle masterpiece from a great director.

A quiet but resonant movie from writer-director Hirokazu Kore-eda, whose previous movie Shop-lifters won the Palme D'Or at Cannes.

Many other filmmakers would make a movie about a difficult family reunion full of screaming episodes and stony silences. But here, Parisian Fabienne (Catherine Deneuve) and her visiting daughter Lumir (Juliette Binoche) don't have shouting matches, they almost shuffle around the house in a fog of resigned disappointment. Their drama is as much played out by proxy in the characters of the film Fabienne is shooting, as it is back home. And this is even with Fabienne publishing a memoir which drastically rewrites their family's history. Similarly low-key is Fabienne's attitude to her career: she has her moments of fire but otherwise is stoically resigned to a slow decay.

It's not a downbeat film; like the shots of the house's garden, there's bright beams of light everywhere. Ethan Hawke's husband and his relationship with his wife and daughter. The eventual exchanges Fabienne's book precipitate between her and her daughter. The simple beauty of everyday conversation between grandmother and granddaughter.

And it's a real pleasure to see these actors, particularly Binoche and Deneuve, so known for their emotionally charged performances, to really dial it back.

Perhaps The Truth is not essential Hirokazu Kore-eda; it's elegant, touching, very well written but not a revelation. However, it's an important film in his career being the first outside of Japan and one with such internationally well-known stars. He manages both changes with a characteristic ease, of course. And, inevitably, non-essential Kore-eda is still full of light and love.

A lovely film - The Truth review by CM

With stunning performances from Catherine Deneuve, Julie Binoche and Ethan Hawke, this is a little gem of a film. A meditation on mothers and daughters, and the passing of the years and the waning of talent.

Fairly tedious and self-reverential - The Truth review by AS

Deneuve (and Binoche) are legends of French cinema, of course, but are sadly coasting through this self-indulgent and self-referential 'film within a film', ostensibly about ageing movie stars and their incestuous and destructive families, but never achieving any real credibility. Ethan Hawke is as lazy as the rest of them (as the token American), though in his case that's his stock in trade. Deneuve at least shows the same gift for comedy and self-parody as in 'Potiche', with some good one-liners (a sort of French Joanna Lumley), but it's really not enough to redeem this false farrago.

Ageing actress story with disfunctional family. Acting is fine but the story is slow, predictable, and not original.

Very elegant but rather superficial - The Truth review by CH

This is visually a beautiful film and often selfconsciously "witty", in the literary sense, with a regular thematic word-play on "truth", "accuracy", "memory", "reality" and of course "play" itself, which becomes the more striking when one hears the French "jouer" and sees it translated as "acted". The semantic gap between playing and acting is in this film exploited almost

as freely as it is, say, in "Hamlet", with the great difference that in "The Truth" the pun is comic rather than tragic. It's a pleasure to watch and frequently funny, Deneuve and Binoche are brilliant, but to my mind the real star is Clémentine Grenier, the wonderful child actor who plays Charlotte, Lumir's daughter and Fabienne's granddaughter. In the end, though, it seemed to me more forgiving than perhaps it should have been. There is much in "The Truth" that recalls the 1978 Bergman film "Autumn Sonata", starring Ingrid Bergman and Liv Ullmann, which also brought a famous mother and a troubled daughter together and also explored episodes in the mother's past which were equally shameful but not so easily glossed over. That earlier film wasn't amusing and not really conclusive, but maybe it was starker and didn't give in to the genial sentimentality which I think is the final flaw of "The Truth".

Japanese director serves up French cinema at its best! - The Truth review by TE

As a big fan of Kore-eda's films I was intrigued to see how his subtle brilliance would travel to a European setting. In the event, 'Truth' is a triumph, a quietly engaging story lit up by stellar performances from all involved.

Catherine Deneuve is superb in her role as an ageing movie star who manages to be convincingly monstrous and lovable at the same time.

Juliette Binoche pitches her performance just right, no mean feat when she is so used to being the lead female character in her films.

And the rest of the cast provide magnificent support at every turn. Kore-eda is clearly a master at getting the best out of his actors, even when the subject is the potentially challenging one of acting itself.

Disappointing - The Truth review by IM

It's very contrived. The autobiography issue seems to virtually disappear. The insight that the characters and we the audience

are supposed to derive from the plot aren't apparent, at least to me. Some touching performances. Is the Deneuve actress supposed to stand for "the Artistic Temperament"

-i.e. monstrously ego driven? That is a cliche in itself!

An elegant melodrama from director Hirokazu Koreeda about memory and the abuse that can be applied to it in family conflict. Catherine Deneuve plays raging French movie star Fabienne, vain, selfish and at times quite cold who has just published her memoirs. This brings her daughter, Lumir (Juliette Binoche) with her American husband Hank (Ethan Hawke) and young daughter, to Paris from the USA where Lumir challenges her mother over the outright lies in her book especially about how loving a mother she was. Over the course of the film the relationships between them become strained, reviewed and ultimately redrawn as Fabienne begins to look differently at the way she has treated Lumir and others. Deneuve gives a stylish performance in what is a witty and at times amusing film although overall it's a little droll and occasionally meanders a bit too much.Binoche too is superb as she tries to reach the affection with her mother she has coveted since childhood. An interesting film.