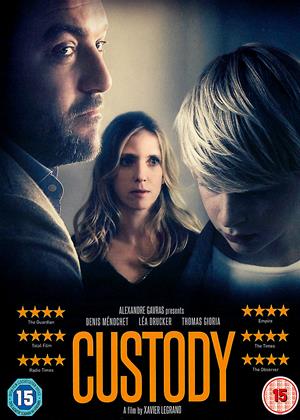 This hyper-realistic French film is relatively short (90 mins) but as hard-hitting as a movie of this kind can be. It is the very ordinary story of an ordinary couple that has split up, and there are 2 kids caught up in between the wife and the husband. They have ordinary jobs in an ordinary-looking French town.

And yet the film manages to create an overwhelming sense of tension and gradually rising fear that is memorable. All the actors are excellent. In some ways, yes, it is a dull story to begin with about an ordinary family falling apart, but you can feel the pain and the sorrow, and the suspense will eventually grip you beyond anything you expected. I thoroughly recommend it.

On the DVD, there is a bonus short film of 30 mins that was supposed to come before the feature film, but you can watch it afterwards. The director should have included it as a preamble to the story, in fact: it, too, is very good. If you watch it first, the feature film makes even more sense.

Nicely paced credible and realistic drama around the dynamics of a family in which the parents have alienated themselves from each other.  There is also a truly terrifying scenario towards the end of the movie. The only issues with the subtitles were at the very beginning because of the background. Other than that, no problem with reading them.

Enjoyed this film although in classic French style it dragged in parts eg the party scene.

You mustn't ignore the short film in the Extras as it is actually a prequel to the main offering.

Should you watch this first? Not sure. Certainly it fills in the gaps but equally it detracts from the perception of one of the main characters and might just modify your views on the denouement.

Brilliantly executed (the film, not the characters!). - Custody review by EC

Don't hesitate, if you like a tale of realistic characters being pushed to the edge. The director spins out his tale cunningly, and with a delicacy and restraint that would have escaped lesser (American?) talents. Most exciting film I've seen since the superb ''71'.

We gave up watching this, life is too short, found it very dull, perhaps it picked up pace we'll never know or care. On a practical note the subtitles were not the easiest to read either.