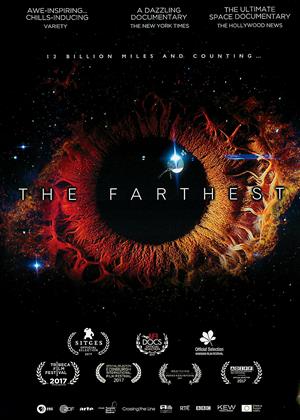 Synopsis:
Humankind's Greatest Journey. More than 12 billion miles away a tiny spaceship is leaving our Solar System and entering the void of deep space - the first human-made object ever to do so. Slowly dying within its heart is a nuclear generator that will beat for perhaps another decade before the lights on Voyager 1 finally go out. But this little craft will travel on for millions of years, carrying a Golden Record bearing recordings and images of life on Earth. The Voyager mission revolutionised our understanding of our Solar System's outer planets - two spacecraft visiting Jupiter, Saturn, Uranus and Neptune on their incredible journeys and in all likelihood they will outlive humanity.
'The Farthest' celebrates these magnificent machines, the men and women who built them and the vision that propelled them farther than anyone could ever have hoped.
Actors:
Frank Drake, Carolyn Porco, John Casani, Lawrence Krauss, Timothy Ferris, Edward Stone, Nick Sagan, Larry Soderblom, Charley Kohlhase, Fran Bagenal, James F. Bell, Frank Locatell, Suzanne Dodd, Jon Lomberg, Heidi Hammel, Candy Hansen, Andrew Ingersoll, Dave Linick, Fernando Peralta, Linda J. Spilker
Directors:
Emer Reynolds
Producers:
John Murray, Clare Stronge
Writers:
Emer Reynolds
Studio:
Screenbound Pictures
Genres:
Documentary, Special Interest
Countries:
Ireland, Documentary, Special Interest

Reviews (6) of The Farthest

Just my thoughts - others will disagree! - The Farthest review by CG

I thought the film was interesting - albeit it could have been somewhat condensed. There's an awful lot of - here we are at NASA 'Ra'Ra'Ra'........

This is understandable given the subject matter - what the satellites have achieved is truly, and quite literally, out of this world!

But the film could achieve the same message, in a shorter format - and probably impact the viewer even more!

Decent documentary on a stellar subject. - The Farthest review by MF

Brilliant pictures, especially of Jupiter and Uranus's satellite Miranda, but too many "talking heads". This could have done with a simple voice-over. There was too much emphasis on the Golden Record which, in my opinion, is a total waste of time. I agree with another viewer who said this could be shorter and have more impact. But it is worthwhile for any fan of astronomy and astrophysics.

A fantastic documentary - The Farthest review by JB

A documentary worth watching, mesmerising pictures of the Solar System, although it could do with less interviewing of random people. I agree with the above review, shorter and more precise.

History of the Voyager Mission - The Farthest review by PB

I really enjoyed this film and found it very interesting. Something I recall vaguely as a teenager but clarified exactly the excitement and sense of discovery of this unique mission which was only possible because of the particular alignment of our planets at that period of time.

Was not expecting much of this documentary but I actually really enjoyed it. Was very interesting and the picture was stunning almost looked 4K at times. Worth a watch

A very informative documentary that captures both the extraordinary complexity of the mission and the excitement of the scientific community.