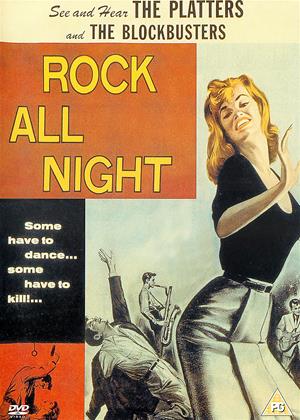 Reviews (1) of Rock All Night

This zero-budget quickie barely scrapes over the one-hour minimum length needed to qualify as a feature film. Opening in a very small nightclub where the Platters, a pre-rock doo-wop combo whom you may actually have heard of, perform a couple of songs because they're the most famous name on the poster, the action quickly moves to a sleazy bar which, oddly, is much the same size and has much the same layout as the posh nightclub, almost as if it's the same set re-dressed. Excuses are found for the Blockbusters, a more authentically rock'n'roll band, to do a few instrumentals which are mostly sung over by a young lady who can't sing, but it doesn't matter, since they aren't exactly Bill Haley and the Comets, however much they want to be. They haven't even got a Wikipedia page.

Having gotten the obligatory musical numbers out of the way, along with a very enthusiastic dance routine by two youngsters who play no further part in the action, what's left of this miniscule film concentrates on the adventures of Shorty (Dick Miller, who was in a lot of B-movies, but whose immortality rests on that scene where he sold several guns to the Terminator, and didn't get paid in the worst way). I do believe the ever-cynical Roger Corman, knowing this throwaway little film didn't matter, was indulging in a bit of stealth parody here. Shorty is an obnoxious creep who constantly behaves as if he hates the world and wants the world to hate him. His idea of fun is to pick a fight with a complete stranger simply because he can't stand anyone being taller than himself (which, as his name suggests, applies to a lot of men), and then make him back down by pulling a knife.

However, Shorty, being the designated hero, ends up saving the day, because everybody knows that if an extreme psychopath who has killed three people in the last half-hour points a gun at you, if you repeatedly insult him without showing fear, there's absolutely no way he'll shoot you - right? The big hint that this entire film is mocking itself, and very likely its target audience, is the inclusion of an absurd middle-aged beatnik who talks ludicrous gibberish at considerable length before our straight-talking hero bluntly informs him that he's making a complete fool of himself. And of course the assumption that the leading lady will automatically love the hero of the movie, even if he's a nasty, aggressive little jerk with a massive inferiority complex and an even bigger death-wish. It's a very minor film indeed, even for Roger Corman, and the acting's mostly atrocious, but it's a harmless enough way to pass an hour.