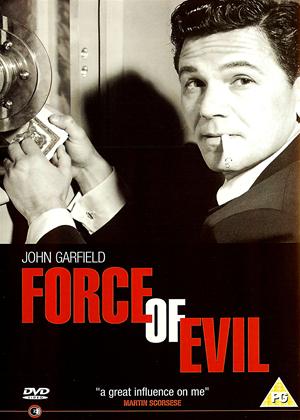 Synopsis:
An ambitious but unscrupulous lawyer (John Garfield) works for the mob, and scents the prospect of a personal fortune when he helps concoct a plan that will merge all of New York City's numbers rackets into a single powerful and unbreakable operation. But one of them is run by his own brother (Thomas Gomez), who is much happier as an independent, mainly because it allows him to apply his own ethical standards to prevent innocent people from being corrupted by his shady activities. And it's the Cain-and-Abel clash between them that gives the film its tragic dimension.
Actors:
John Garfield, Thomas Gomez, Marie Windsor, Howland Chamberlain, Roy Roberts, Paul Fix, Stanley Prager, Barry Kelley, Paul McVey, Beatrice Pearson, Murray Alper, Jessie Arnold, Sam Ash, Georgia Backus, Margaret Bert, Larry J. Blake, Mildred Boyd, Beau Bridges, Ralph Brooks, John Butler
Directors:
Abraham Polonsky
Producers:
Bob Roberts
Writers:
Abraham Polonsky, Ira Wolfert
Studio:
MGM
Genres:
Classics, Drama

Reviews (2) of Force of Evil

The opening titles inform us that the restoration of this print was partly paid for by Martin Scorsese, and you can see why he cared enough to do it, because this short and unassuming B-movie is a minor masterpiece, and its influence on some of Scorsese's best-known films is obvious. Ignore the synopsis on the main page, which conveys no sense at all of what this film is about, and describes events of minor importance which occur a very long way in. This is the story of a selfish, almost amoral anti-hero who is delighted to help very bad men illegally become rich if it'll make him rich too, so long as the bad things they do are low-key enough for him to turn a blind eye to them, but who eventually catches on the hard way that there's a very big difference indeed between not being good and being downright evil.

John Garfield, given the difficult job of making us care about an extremely unpleasant man, manages it superbly, only faltering in a scene where he has to act drunk, something actors should never try to do because so few of them can. Interestingly, although he falls for an impossibly good woman because this type of man in this type of film always does, that inevitable romantic subplot is barely relevant, and the driving force behind the gradual and very reluctant transformation of the character is almost entirely the realistically complicated bond between him and his brother, a man who, like everyone in this movie, isn't perfect, but who tries to do the right thing, and whose relationship with his brother who doesn't even try is strained to breaking point.

The film's central theme isn't good guys versus bad guys. Both brothers work for the same mob kingpin, the main difference between them being how willingly they do it. As for the cops, they aren't in the movie enough to become real characters, and when they do show up, they don't act much like heroes, needlessly bullying insignificant underlings who haven't done anything truly wrong. What it's really about is compromise, and how far you're willing to take it. Several characters both major and minor find themselves being forcibly dragged over lines they'd made up their minds never to cross, and we see what it does to them. They don't always react in ways that serve their own best interests, and sometimes they make decisions that are downright insane, just like real people who have been pushed too far often do, though you seldom see it in movies, especially ones this old. If there's a moral, it's that everyone's a bit of a hypocrite, but you're only evil if your willingness to profit at other peoples' expense has no limits at all.

As gangster films go, this one has exceptionally little action. The bad guys are trying to go legitimate because they don't care how they get their money so long as they get it, and if they can get it without risking going to jail, so much the better, thus even the distinction between legal and illegal profiteering is blurred, and the main character is a lawyer with only one very dubious but very rich client, so most of the weapons used are words rather than guns. But as a character-study of people who are to varying degrees good and bad but are all caught up in a situation which is very bad indeed, it deserves recognition as a primitive half-formed ancestor of true classics like "The Godfather".

Two Brothers - Force of Evil review by NO

Well photographed in B&W & good performance from Garfield & Gomez.Pity Garfield died so young.Rather dated with no action compared to

modern Gangster films although I would not call this a Gangster film more a study in a brotherly relationship.Fortunately no real violence apart

from the newspaper shot of poor Bauer which reminded me of Battleship Potemkin.A classic film noir but no real Femme Fatale.