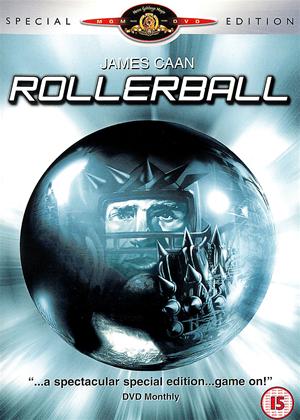 Synopsis:
The year is 2018. There are no wars. There is no crime. There is only... the Game. In a world where ruthless corporations reign supreme, this vicious and barbaric "sport" is the only outlet for the pent-up anger and frustrations of the masses. Tuned to their televisions, the people watch "Rollerball": a brutal mutation of football, motocross and hockey. Jonathan E. (James Caan) is the champion player - a man too talented for his own good. The Corporation has taken away the woman Jonathan loves (Maud Adams) but they can't take away his soul - even if the diabolical corporate head (John Houseman) tells him he'd better retire... or suffer the old-fashioned way.
Actors:
James Caan, John Houseman, Maud Adams, John Beck, Moses Gunn, Pamela Hensley, Barbara Trentham, John Normington, Shane Rimmer, Burt Kwouk, Nancy Bleier, Richard LeParmentier, Robert Ito, Ralph Richardson
Directors:
Norman Jewison
Producers:
Norman Jewison, Patrick J. Palmer
Writers:
William Harrison
Others:
Derek Ball, Les Wiggins, John Box, Douglas Slocombe, Gordon K McCallum, Antony Gibbs, Archie Ludski
Studio:
MGM
Genres:
Classics, Sci-Fi & Fantasy
Awards:

Truly from a Different Era - Rollerball review by MD

It is fascinating to watch this film again after nearly 40 years; you realise just how much movies have changed in that time. It is a violent film that is not really at all violent. It is a thriller that is not just all-action, but thoughtful and provocative, too. It is a movie not made to a formula, but strangely quirky and offbeat. Most of all, it is a film that focuses on people and characters more than mere plot and technical wizardry.

Of course, it won't be to everyone's liking, and certainly it looks dated, ponderous and almost daft when set alongside slick modern blockbusters. Nonetheless, it holds it own very well, and can be enjoyed both as a "museum piece" and as a decent film in its own right. If you have not seen it, it is worth a look.

This is a film which commits one of the most unforgivable cinematic sins. It promises us something it doesn't deliver. Set in a ridiculously simplified and very seventies future where all the world's problems, apart from massive class inequality, have been solved by addicting everybody on the planet to an ultra-violent sport, it shows us precisely three games of Rollerball. The first is approximately as violent as a normal game of American Football. After which it's about an hour between matches, and we never, ever get to see the kind of mayhem you'd expect from an 18 certificate movie in which a lump of steel the size of a grapefruit is fired at people on motorcycles who want to kill each other at 120 miles an hour. There's a tiny bit of blood now and then, but basically this movie is "adult" because there's one scene in which you get to see a few male bottoms, which I'm absolutely certain is there for no reason other than to bump up the certificate so that you think this film will be more fun than it actually is.

James Caan does his best as a two-dimensional character who nevertheless manages to have at least one dimension more than anybody else in the film, but frankly it's dull. In fact, without him, it would be one-star. Even the sport of Rollerball comes across as somewhat baffling. If I was playing a game where the basic idea was to hurt the opposing players as badly as possible, and I had a choice between a motorcycle and roller-skates, I know which I'd go for! And in terms of skill, it's essentially people hitting each other in a too-small arena and once in a while scoring a goal so easy that when anybody misses they're obviously doing it on purpose.

Sorry, but this movie drags. "Death Race 2000" ripped it off shamelessly and ended up being a much bigger hit because it did what it said on the tin. It concentrated entirely on an actual race which involved actual death, rather than spending most of its running time exploring the hero's existential angst. Also, Roger Corman is one hell of a lot better at directing action than Norman Jewison. The best I can say about it is that it's a really weird period piece, and James Caan almost manages to be good in the face of a script that no actor could really triumph over.