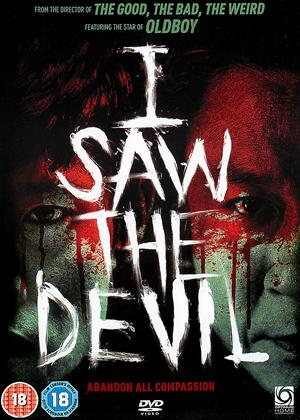 Synopsis:
A psychotic serial killer is on the loose, committing some of the most diabolical crimes the police have ever witnessed. No one is safe as the body count rises and the killer continues his evil odyssey of sadistic butchery. But when the fiancée of an elite special agent becomes one of his victims, a personal investigation becomes a merciless and brutal game of vengeance. As one violent encounter leads to another, it's a game where the hunter becomes as unhinged as the hunted.
Actors:
Byung-hun Lee, Min-sik Choi, In-seo Kim, Seung-ah Yoon, Ho-jin Chun, San-ha Oh, Bo-ra Nam, Kap-su Kim, Yoon-seo Kim, Moo-Seong Choi, Gook-hwan Jeon, Chae-young Yoon, Ji-yoon Jeong, Jin-ho Choi, Seo-yeon Park, Dae-hye Kim, Ji-Eun Lee, Yeong-Seon Kim, Hang-soo Lee, Park Ji-Yeon
Directors:
Jee-woon Kim
Writers:
Hoon-jung Park
Aka:
Akmareul Boatda
Studio:
Optimum
Genres:
Drama, Horror, Thrillers
Countries:
Korea, Drama, Horror, Thrillers

Reviews of I Saw the Devil

I Saw the Devil is a Korean revenge movie about a secret agent whose pregnant wife becomes the latest victim of a rampaging serial killer who has been chased by the police for years. Kyung-chul (Choi Min-sik), known for his role in other Korean revenge movie Oldboy) is a psychotic and violent killer who preys on anyone from women to young children. Soo-hyun (Lee Byung-hun) vows to get revenge for the murder of his love, no matter the cost to himself.

The cost to both himself and the audience is extremely violent; utterly disgusting at points the movie takes no prisoners in it’s depiction of gore which stays relentless throughout the movie’s runtime. Byung-hun hunts down Kyung-chui by torturing his way through the cities underworld; upon finding his foe he exacts his revenge beating the man almost to death and then, in a strange turn of events, releases him. The film does not end here however, this is hardly a sudden change of heart on Soo-hyun’s behalf; Byung-hun hounds the murderer, catching him again and again as he attempts to continue his despicable deeds and once again beating him within an inch of his life.

Byung-hun’s particular choice of revenge tactics turn him from the man he once was, introduced to us at the start of the film, into a violent and obsessive monster, completely unaware of the effect his behaviour is having on others.

The plot allows little respite from the horrific and unrestrained violence; yet there is a deep emotion within the film without which would make it utterly un-watchable. The tone of the film also shifts constantly, further softening the violent images on screen; it varies from gore to surreal and right into to an almost mystical yet urban beauty. This is all well and good but somehow the movie lacks the elegance and depth of some of it’s predecessors in the world of the Korean revenge movie. The violence is almost too sickening and the characters, although played well by Byung-hun and Min-sik are both un-interesting and skin-crawlingly unpleasant respectively which ultimately makes the film more of a difficult watch than an interesting exploration of emotion and violence.