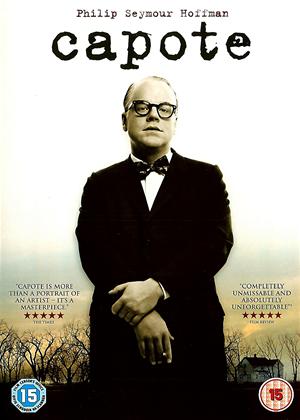 If you watch one movie about Truman Capote... - Capote review by Kurtz

..make it “Infamous”- featuring Brit Toby Jones as Capote, it’s a much livelier take on essentially the same segment of the famous author’s life than this offering. In “Capote,” Hoffman’s portrayal of the first gay superstar is faultless, but the Capote’s lisp and determined mincing are surely a bit of an open goal to any actor worth their salt. Endless scenes of Hoffman sitting on planes staring at clouds, fiddling with his specs and unscrewing scotch bottles don’t really portray the inner torment that they are supposed to. Sure, there are valid points made about the morality of Capote becoming a national icon by selling the true-life story of two murderers and a family of innocent victims, but it all gets a bit too introspective- maybe the director was too busy getting Hoffman’s cravat right to worry about the audience.

Sometimes 5 stars are not enough. Hoffman and Keener are absolutely absorbing; their cold indifferent but intense relationship is the backdrop to an equally intense relationship between journalist and murderer. There are so many themes running through the plot as examples: the effect of alcoholism on a lonely man and the effect of crime on a remote community. Few better films have I seen.

This is a thinking person's film, and an interesting story to boot. Writers and friends Capote and Harper Lee choose to research and write about the murder of a family in America's Mid-West. Capote is a witty, person with razor sharp intellect and is played brilliantly by Seymour Hoffman. He captivates the audience with his story telling ability, whether that be at a party or in a book. The relationship between Capote and the murderers as they wait in Death Row is fully explored, as are his morality, values, and sense of obligation to the subjects he is writing about. Fascinating.

A uniquely insightful movie that is very disturbing at times. The symbiotic realtionship between Capote and the murderers is fantastically explored and leaves you feeling genuinely fearful for the author the more he gets entrenched in the mens' lives.

Not the easiest film to watch at times, but well worth it for the emotional rollercoaster that it puts you through.

to understand the big picture around and the lives touched by the murder of a family in the American Mid West. It's an engaging story that requires patience as this is a very slow moving story where the lives and motives of the murderers are explored by the writer.

The emotions involved and the twisted sense of loyalty that the writer developers towards the murderers is the basis of a interesting film.