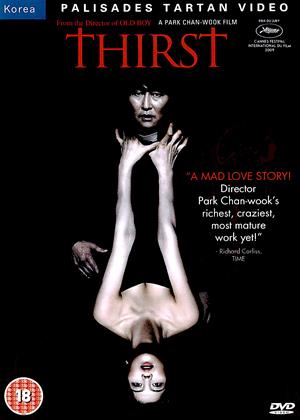 What Should I Watch Next
14 films by cinemadiso

Being from the director responsible for Oldboy and Sympathy for Lady Vengeance, you know that Thirst will not pull any punches in its subject matter. Park Chan Wook continues his impressive CV with his take on the vampire myth that puts almost every other vampire flick of recent years in its place except Let The Right One In. Visually stunning, we follow a priest’s decent into oblivion and sin propelled by his vampire infliction. The trip is memorable as he tries to maintain his persona whilst inside being faced with unnatural urges. His job working in the hospital, often administering last rights exposes him to all sorts of scenarios involving blood.

Thirst for this! - Thirst review by Kurtz

Another blinding piece of human wickedness from the director of "Oldboy". "Thirst" mines the vampire myth for material rather than "Oldboy's" gangster genre, but it's really only telling half the story to call it a vampire flick. There's much, much more- love triangles, musings on faith and doubt, and some bizarre comic moments.Oh, and tons of sex and gore....

High expectations were not disappointed - Thirst review by DT

I'll preface this review by saying I'm not a fan of vampire films... at all. Not the modern sparkling in the daylight type, not the classics. I just don't understand the appeal of them, don't understand the metaphors often applied to them and don't understand why a character might want to become a vampire - as opposed to the zombie/werewolf films in which they have no choice.

Thirst is no different. Yes, it's a vampire film. But at the core it's a love story entangled in a crime thriller. Much of the plot seems to follow the classic film-noir formula - a woman from an unhappy marriage starts an affair with a troubled man, and together they plot to "take care" of the husband - think Double Indemnity or The Postman Always Rings Twice. There is even a particularly suspenseful scene involving a character communicating only by blinking to reveal a hidden secret, which takes many tricks from Hitchcock and other films from the classic Hollywood era.

The vampire metaphor also worked for me this time - essentially a priest dealing with temptation. The priest is infected with two different ailments - a virus which creates boils on the skin and leads to a slow painful death, and... vampirism, which gives him superstrength and instant healing powers. If he does not drink blood, he will not heal, and the virus returns. Meanwhile he meets a young woman who teaches him the pleasures of the flesh and his life becomes a struggle to balance his survival and his faith.

In writing this does sound like many other vampire stories, but with Park Chan-Wook and the amazing filmmaking talents in South Korea, this becomes much more.