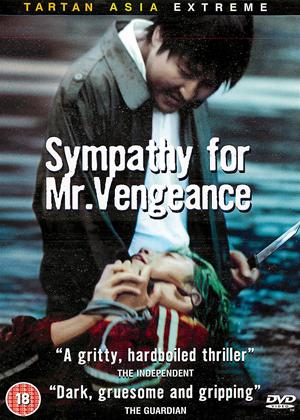 Reviews (3) of Sympathy for Mr. Vengeance

A challenging tale of fate - Sympathy for Mr. Vengeance review by CP Customer

I rented this purely on the strength of director 'Chan-wook Parks' superb 2003 film 'Old Boy', but where as 'Old Boy' is an intense, fast paced and stylish film, 'Sympathy for Mr Vengeance' is a far more slowly paced and bleak affair. Though the first part of 'Chan-wook Parks' revenge trilogy, (with 'Old Boy' the second, and the as yet unreleased 'Sympathy for Lady Vengeance' the last), 'Sympathy For Mr Vengance' is less about revenge and more about cruel twists of fate, with only the final 35 minutes of the film related to the films two main characters seeking revenge. In its own right this is a decent enough film with an interesting story including some clever plot twists, and if you're a fan of Asian cinema it's worth a look; but if you're expecting something as powerful and extreme as 'Old Boy' you're bound be a little disappointed.

Difficult to follow but probably worth the effort - Sympathy for Mr. Vengeance review by CP Customer

It took me quite a while to get into this film as, particularly in the beginning, it is difficult to work out what is going on and it seemed a bit weird at times but after the actual kidnap takes place it picks up pace and turns into quite an interesting story with a few twists and turns and also a few shocks. Probably worth the effort but if you happen to speak Korean so much the better.

Confused? You will be – but that's part of the film's strange attraction - Sympathy for Mr. Vengeance review by RP

The storyline in 'Mr Vengeance' is complex. The central character is Ryu, a deaf-mute (so not much dialogue there) who seeks revenge for his sister's death against nasty organ-dealers, and against the factory boss who sacked him. Following a disastrous kidnapping, the father of the young kidnapped girl seeks vengeance against Ryu. After the torture and death of Ryu's girlfriend, her anarchist/revolutionary friends seek revenge for her death. Confused? You will be – but that's part of the film's strange attraction. That and assorted bloodshed and grisly scenes, of course. While it's not as good as 'Oldboy' I enjoyed it. I rate 'Oldboy' as 4/5 stars – I'll give this one 3/5. Recommended - watch it if you enjoyed 'Oldboy'.