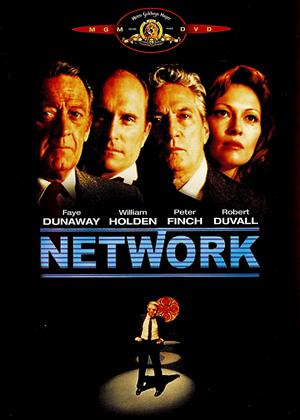 This movies is superb - well-written (script won the Oscar), generally well-acted (some overacting too, but that fits actually in such a farcical satirical context), great sound (you can hear every line and there is no constant pounding music drowning out the dialogue as with so many modern movies). The scathing satire of the TV industry is still relevant today - except that today both TV and the Internet have gone further than any character on this movie could have imagined! Compared to TV these days, 1970s trash seems quality and 1970s sex and violence very tame indeed; now we have presenter-led TV where the presenter and not the programme matters (which is why the ubiquitous and oleaginous St Stephen Fry, a man stupid people think is intelligent, narrates programmes on wildlife and whales about which he knows nothing at all!)....This movie, together with The Truman Show, are the best movies about TV ever made. This film deserved its Oscars (they often don't!). A classic movie - in the top 50 movies ever made for sure. 5 stars.

Very entertaining satire and difficult to believe it was produced so long ago. Just as relevant today.

A film that truly deserves the title 'classic'. Superbly written, beautifully acted and as relevant today (2020) as it was 40 years ago.

There is not one redundant line in the whole film and aside from Peter Finch 'going off on one' as the main theme, the soliloquies of several of the other characters (most notably the wronged wife) were stunning in their delivery.

Every word was clear - i.e. they were not speaking from the inside of an especially hirsute Yak (as so many film today are). There was no bloody awful and inappropriate music (piano arpeggios) drowning out what was being said. The atmosphere was provided by the excellent acting.

I'd love to know what PV has got against Stephen Fry? His review was fine until he (or she) got to that bit.

Inter-Network - Network review by AM

Hmmm, what a queer one! Starts off very strong and with some laugh out loud moments too. But tailed off a bit in the middle and I wasn't sure where it was going by the time we got to the end. It's a bit heavy-handed with the satire at times, and the whole side-plot of the "Mao Tse-Tung Hour" left me a bit cold as to the point of it, but I guess all leading in one direction. Faye Dunaway is superb in this - as is William Holden (I'd have given him the Best Actor Oscar to go along with Dunaway's, rather than Finch). But it feels as though just as it was getting up to speed it sort of petered out and lost direction.

Still - for a scathing satire on corporate America and the TV network system, go no further!

Where are these Bananas going?!!

Network won four Oscars, was highly successful and much fêted by the critics back in the seventies. Surprisingly it has held its high reputation-- if guides and polls are to be believed. But the years have not been kind to this film. The core of the film is internal politics in big business. Now, this may have been groundbreaking in 1976 but since the nineties we have become accustomed to great movies that handle the subject more proficiently -- think Michael Douglas. Then there's the "Joan of Arc problem" by which I mean the great difficulty in giving the Messianic figure text which will convince the audience that the world would sit up and take notice. Frankly the script, despite all the plaudits it received, is not very good. Because the writers could not deliver a Mark Anthony climax to the demagogue's speeches they resorted to having Finch faint. This gave him all the conviction of a narcoleptic puppy. Then there were the sub-plots :The Ecumenical Liberation Front was sub-Monty Python, and not so much funny as laughable; the eternal triangle involving Dunaway, Holden (too old for a part repeatedly described as middle-aged) and H's wife was trite ,inconsequential. At best this film is an interesting period piece.