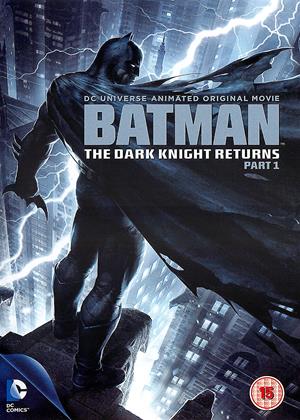 Rent other films like Batman: The Dark Knight Returns: Part 1

Where DC falters in live action, it also manages to succeed in their animated offerings. Batman: The Dark Knight Returns: Part 1 is the first part of a two-part animated Batman series where Batman is basically a grandpa. A bad-ass, butt-kicking, agile grandpa. And he is coming out of retirement to serve the citizens of Gotham for one last time – stop the almighty Superman from using his powers for better or worse. Mostly worse. If this sounds familiar, then this is exactly what Batman V Superman should’ve been, if it weren’t for studio meddling, studio cutting, and general studio lollygagging against, in my humble opinion, one of the most talented and unique directors of all time. Uwe Boll. No, I’m kidding, it’s Zack Snyder.

Batman: The Dark Knight Returns: Part 1 is the incarnation of Frank Miller’s graphical novel that takes a dark turn against the infamous Dark Knight. This time, billionaire heartthrob Bruce Wayne is more so equated with (the now late) Hugh Hefner, as opposed to any other playboy for instance. The first part of this tale then follows Batman as he comes out of retirement (at first) to battle a newly-formed threat that go by the name The Mutants. By the way, these Mutants are just obstacles that the character of Batman needs to overcome in light of growing; despite his old age, Frank Miller (in the source material) has managed to make him a man that has something worth fighting for, or something to emerge smarter and wiser of. This threat happens to be incarnated through Batman’s own state of mind, rather than his physical prowess (which is undoubtedly lacking). Oh, and the Mutants are led by a savage Mutant leader, who is like a dark reflection of what Batman could’ve been.

On the other hand, there is Harvey Dent as one of the most underrated (again, in my humble opinion) villains in the DC universe. His demeanor serves to deconstruct Batman’s mental state, as he is constantly faced with an ever-recurring threat in the form of Two-Face. Is Batman truly a mask that hides a flawed, deeply hurt man? Or is it something more, an ideal that people will constantly strive for?

Now, the technical details. The voice acting is flawless, as each actor lends such a gravitas to a bunch of moving colorful paper that you’re immediately sucked into the experience: it’s just as if you’re there in medias res (sorry for that Latin nonsense). Batman’s voice is darker (voiced by Peter Weller), grittier, and it truly feels like a man whose life has served him everything but stars and rainbows. I’m trying to say that Bruce doesn’t have it easy in life.