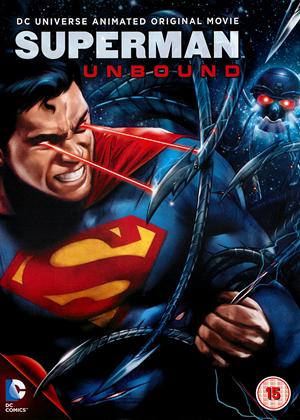 Based on Geoff Johns’s Superman comic run of Brainiac, Superman: Unbound finds the Man of Steel tackling his toughest of inorganic foes. Brainiac was reimagined as a deadlier villain in his quest for all knowledge, capable of shrinking cities for his own collection. While his revision does make him a more unique villain on the surface, his analytical personality makes this story feel more like a reiteration of brain versus brawn, despite an extra bit of brawn thrown on Brainiac’s side.

Brainiac does appear more terrifying in this tale considering how much more personally he affects Superman. He reveals early on that he has captured the Kryptonian city of Kandor, giving a goal for both Superman and Supergirl to work towards without just mindlessly smashing up all of Brainiac’s cybernetic horrors. He also has an army of murderous robots that decimate Metropolis in rather bloody ways. Superman has to get more crafty in handling such a threat to both his culture and all of Metropolis.

There’s an odd sensation of how much Superman stories seem to repeat themselves given when this film came out in 2013. At that time, we’d already had a New 52 run of Superman that duplicated much of the same story involving Brainiac and the shrinking of cities. Man of Steel also debuted in theaters and featured a scene where Zod is weakened by not being used to the sounds of Earth. In Unbound, Brainiac has a similar moment, being forced out of his robotic cocoon and forced to handle all the noise. There’s so much overlap that becomes an uncomfortable reminder of how Superman seems to repeat itself, perhaps more by Johns’s run being torn from so much.

There’s at least a new voice cast present. Matt Bomer does a decent job as Superman by being both shaken about Brainiac’s discoveries and filled with fury in trying to stop him. Stana Katic gives a natural performance as a Lois Lane seeking to take her relationship with Clark Kent to the next level. John Noble delivers a dryly sinister approach required to make Brainiac a force to reckon with. And Molly Quinn gives off the right level of innocence and determination as Supergirl.

Superman: Unbound is far from the worst of Superman animated films. The cast is strong, the animation unique enough, and the action is exciting. But considering it’s based on an average run of the Man of Steel and doesn’t do too much to diverge from the source material, it feels far more like a standard Superman story than it should.