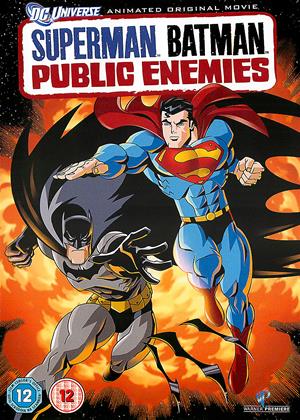 Public Enemies poses a unique scenario of Batman and Superman being recognized as enemies of all. It brings into question how accountable the two heroes are for their actions and how much trust they have in the world. But rather than being some thoughtful look on the issue, the film more or less settles for becoming a wrestling match of Superman and Batman versus the world.

The premise of the picture is that a Kryptonite asteroid is headed towards Earth and that Luthor spots this as the perfect opportunity to blame Superman for such an impending disaster. Not only does Luthor frame the man of steel for this event but offers up a $1 billion bounty on his head, in addition to Batman for being his partner in crime. This leads to not only every supervillain coming out of the woodwork to claim such a prize but every superhero as well.

And, really, that’s about all there is to this story. Sure, there’s a bit of nostalgic thrill to hear Tim Daly and Kevin Conroy return once more to voice the characters of Superman and Batman respectively. But to what end? All they really do is get into some scuffles with a big ensemble of characters. We’re not even given a lot of motivation for the attacking characters. Characters such as Banshee and Starfire just sort of show up to be present and take a punch from the two top characters in DC Comics. And while the fights are excitingly staged, they also grow more ridiculous, to the point that it honestly didn’t surprise the resolve of the film involves Batman piloting a goofy-looking giant robot (no, seriously, this happens in the movie).

The closest comparison for this type of film is that it mimics the mechanics of the most forgettable of Dragon Ball Z movies, right down to the ludicrously short running time of 67 minutes. It’s a short film because it’s really just a series of skirmishes with familiar characters that are really only going to be of use to DC fans who want to make a case for Superman beating Captain Marvel or Batman being Hawkman.

Public Enemies feels more like watching a video game than a movie, to the point where you can almost see the health bar above each battle. The DC Comics animated movies have thankfully improved since this picture to explore the more interesting and compelling stories of superheroes. Public Enemies is not one of them, ripping from material that is more interesting in the questions it poses rather than the implementation that answers none of them.