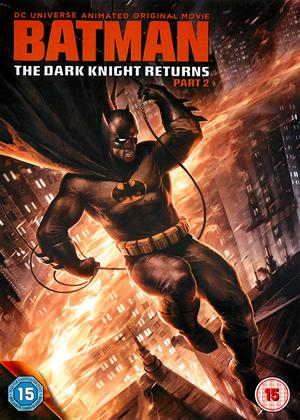 Synopsis:
The Dark Knight and the brave, young Carrie Kelly at his side as Robin have finally reclaimed Gotham City and allowed a ray of hope to penetrate the reign of terror that The Mutants cast upon their city. With Batman back in the spotlight, the extended media coverage has awoken a far worse evil at Arkham Asylum - The Joker! Destined to be Batman's mortal enemy, The Joker has a diabolical scheme that may pull Batman down to the darkest levels of insanity. Meanwhile, on the horizon, a global catastrophe races toward Gotham, and with it comes a familiar face, the Man Of Steel, though this time he has Batman in his sights.
A returning voice cast, headed by Peter Weller, Ariel Winter and David Selby, delivers the epic finale of this DC Comics legend. Watch as the aging Dark Knight wages a tireless war against crime while proving that courage and will are indeed timeless.
Directors:
Jay Oliva
Producers:
Benjamin Melniker, Alan Burnett
Voiced By:
Peter Weller, Ariel Winter, Michael Emerson, David Selby, Mark Valley, Carlos Alazraqui, Dee Bradley Baker, Paget Brewster, Maria Canals-Barrera, Townsend Coleman, Grey Griffin, Robin Atkin Downes, Greg Eagles, Michael Jackson, Danny Jacobs, Maurice LaMarche, Lex Lang, Yuri Lowenthal, Tress MacNeille, Michael McKean
Creators:
Bob Kane, Jerry Siegel, Joe Shuster
Writers:
Bob Kane, Jerry Siegel
Studio:
Warner
Genres:
Action & Adventure, Anime & Animation, Sci-Fi & Fantasy

Rent other films like Batman: The Dark Knight Returns: Part 2

Batman: The Dark Knight Returns: Part 2 sees Bruce Wayne finally putting on the cape and embracing his alter-ego as his one and true identity. Perhaps not as emotionally charged as Batman: The Dark Knight Returns: Part 1 (mostly because the first part focused on raising tension and pitting Batman in an unfamiliar turf), the second and final part of Frank Miller’s take on the Caped Crusader (directed by genius “cartoon-maker” Jay Oliva) is still as poignant as a story about a man in a bat suit can ever be. Why on Earth the studio behind Batman V Superman didn’t directly adapted this story is surely beyond me to answer.

The second part of this two-part animated story is Batman VS Superman. In some ways, now Batman is a true vigilante who gets betrayed even by his own kind, i.e. the Gotham authorities. And not only that, now the Feds want Superman to fight Batman in what seems like an impossible-odd scenario for Bruce. But, being the genius as he is, ole Bruce Wayne conjures up a plan to stand up to Superman, and this is where the animation shines. In fact, if you better think of it, the majority of Batman: The Dark Knight Returns: Part 2 are preparations about the brawl with Clark Kent, who surely must have the upper hand, right? Well, you have to see the film to answer that.

Visually, the feature is beyond stunning. While not quite reach with detail as, say, the Fullmetal stories, Batman: The Dark Knight Returns: Part 2 plays well with what its team has, namely shadows, lightning, character design, sound, music, and virtual camera movement as well. These angles of the animation are done creatively yet precise to the minute detail; the music is minimal but impactful, while the voice acting is on par with some of the best live superhero features to date. It also has some Conan O’Brien and Andy Richter thrown in there for good measure. See kids, a little talent can get you a long way in life.

Now, what about the flaws? Batman: The Dark Knight Returns: Part 2 doesn’t have any. It’s so superbly done that one almost forgets that they’re watching an animated film about a Bat-man and an almighty alien creature from space. And the final fight between these two brawlers: well that’s like the cherry on top of another cherry on top of a mouth-watering icing on the cake. Yup it’s that good.

Finally, is Batman: The Dark Knight Returns: Part 2, or as a matter of fact, is the whole duo-logy worth a look? You bet.