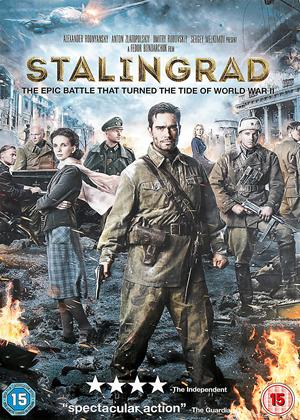 Stalingrad: a Russian view - Stalingrad review by VS

Granted the crucial importance of the long battle for Stalingrad in WWII, it's not surprising that there have been several films about it. But this is the first Russian one I've seen and granted how (understandably) Russians developed a visceral hatred of the German invaders, it's encouraging to see that there is a sympathetic portrayal of a battle-hardened German officer. This film concentrates on small numbers of people seeking to survive. The "historical epic" aspects are relegated to the background. The film is tough but charged with a humanity that transcends nations at war.

I really wanted to like this film. There have been some great films made about WWII recently - from Poland, for example, BATTLE FOR SEVASTAPOL, WALKING WITH THE ENEMY in Hungary, ALONE IN BERLIN, the great GENERATION WAR. And the Russian ATTACK ON LENINGRAD.

This however is not the cinematic account of the horrific crucial battle of Stalingrad I was expecting.

I did start watching it with awful American dubbing. Then stopped and changed the setting to Russian with subtitles.

That however did not get rid of the awful loud intrusive fake-blockbuster-soundtrack, or the stilted dialogue or the awful martial-arts-style slomo fight scenes which I hated.

Watch the great 1993 German film STALINGRAD instead. Or a documentary.

Some decent scenes but very disappointing. The whole thing is rather muddled and flabby too.

Stalingrad - anyone seen the plot? - Stalingrad review by DT

Rubbish - no plot at all and very poor scripting & acting, corny American dubbing just about tops it off. Don't bother!!

Finding the perfect tone when creating a film is hard to begin with but when it comes to war films, especially war films devoted to one of the most well known battles of the 2nd World War. The problem with Stalingrad isn’t that it doesn’t respect the events or that it omits parts of the deadly showdown, it’s that at its heart Stalingrad doesn’t feel like a war movie, it’s an action film and something about that feels ever so slightly wrong.

Stalingrad follows the exploits of a small group of Russian soldiers assigned the deadly task of controlling an area of the Volga river to allow the Russians to cross into the city. However when they find the battle restricted to the control of one apartment building hiding the crossing they find themselves fighting to survive while waiting for reinforcements to arrive, something they aren’t even sure is going to happen.

While the film also features a truly odd love story to boot it really feels like an all out action flick with some exceptional fights, some brutal deaths and plenty of explosions to tide over the avid action enthusiast. People looking for a war film however will not be treated to a nuanced look at the effects of the battle and its power over its participants. While the toll seems high, it is always tempered by some other fight happening or some cliched action stereotype.

The films cast are really just required to spout plot moving dialogue with little regard for emotional resonance with the sole emotional plotline feeling tagged on and strangely innapropriate for the film you are watching. Not only that but Stalingrad feels incomplete like the films closed off setting doesn’t allow for a real perspective, effectively making Stalingrad an interesting new take on films like Assault on Precinct 13. While the film does use elements of 13 it doesn’t quite take advantage of the morally ambiguous state all these men (and some trapped women) face during their time in battle.

All in all Stalingrad isn’t the war film you are expecting and by the end of it its surprising how little of the film affected you, especially considering the lives lost and the country ravaged by its effects.