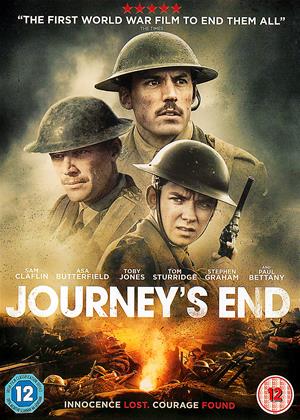 This excellent First World War Movie, based on an original play and book, captures the boredom and horror of life in the trenches.

The cast is superb, as is the atmosphere and tension created by the anticipated attack on the Allies front.

A very moving story, brilliantly brought to the screen and gives a very realistic view of what life must have been like in 1918 for Officers and Men on the front line.

Well executed film that portrays the absolute futility of the first world war and the complete stupidity of the aristocratic prats "in charge". Not an easy watch, or particularly entertaining, a worthwhile watch nonetheless.

As a fan of the original play I am curious as to how film makers go about converting it to a film. In this instance it was OK but felt that the supporting cast were the real stars. Visually to look at, it was first rate and the supporting cast were exceptional and special credit must go to Toby Jones, but for me the problem was that I could connect with Sam Claflin characterisation of the officer commanding the unit and this left me at times, wandering away from it.

Absolutely nothing happens in this film....bored throughout. It may well have been boring in the trenches, but this doesn't make for "entertainment".

This film is good in the way that it differentiates itself from the usual war films, which are full of and mainly concentrate on the action and gory side of battles in the field. This film instead concentrates all its efforts on the mental side of war and how the fatigue, panic and fear of the enemy and the unknown takes its toll on those involved.

In that sense the film creates a great atmosphere and at times an almost palpable feeling of tension to make you appreciate what those soldiers must have been feeling and going through.

That said though, the addition of a bit more action would have still seen the film maintain its core aim but at the same time giving enough to keep your full and undivided attention.

To that end this film fell short for me and was watchable but won’t stick in the memory for long.

This is a magnificent film, documenting the destruction of personality, the following of duty when fear and nerves have reached a breaking point in the trenches.

It does not follow the novel very closely, or the stage play, and is seen in its own right. The plot it is virtually the same as in the Royal Flying Corps drama "Aces High".

Engages with the horrors of what war does to people beyond physical injury - absolutely spellbinding.

If you are looking for an action film this is not it. Cannot compare it to the original play. More about the sacrifice of the soldiers in the front. Was the basis for Aces High.