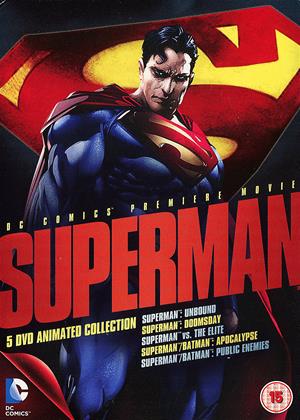 Reviews of Superman vs. the Elite

Superman vs. the Elite review by Mark McPherson - Cinema Paradiso

A question always seems to arise from somebody who doesn’t truly understand Superman: Why doesn’t he just kill the villains? After all, he has the strength to do so and could easily rid the world of such threats to towering for police or human heroes without such powers. The answer should be obvious for anybody who understands the philosophy behind such a character. But just in case it’s not clear, Superman vs. The Elite showcases explicitly why Superman shouldn’t kill.

Based on "What's So Funny About Truth, Justice & the American Way?" in Action Comics #775, The story is more akin to Superman vs. The Authority. At the same time that Superman continues to find non-lethal ways of taking down dangerous criminals, a punk-style group of superheroes known as The Elite frame themselves as doing everything Superman does not. While Superman attempts to keep villains in check without killing, the Elites openly kill and bring collateral damage wherever they can. And the worst part is that the public seems to agree with their methods.

Superman finds himself in a tough spot of trying to prove that his ways are more effective than cold revenge. He’s really not sure how to make this point clear to a blood-thirsty world that would rather watch a criminal brutalized than seek a means of justice. There’s a particularly interesting scenario where a superpowered criminal escapes from prison and murders a boy’s father. The boy is then given an option by one of the members of The Elite to have the villain killed right on the street in front of everybody. Angry and hungry for vengeance, the boy asks for murder. How do you compete with that?

This leads into one of the scariest and frightening forms of Superman when he reveals just how violent he can be. The Elite faces off against an unstable, sinister, and willing-to-kill Superman who can easily punch each member of the Elite into the atmosphere. Of course, Superman has a bigger plan at play but first, he needs to showcase why going the extra mile of carnage and death is not an effective way to fight crime. It’s also kinda neat to watch Superman really become such a sinister force.

Reprising his role from Justice League is George Newbern once more in the role of Superman and his stern delivery really works well here. His attempts to find reason in a world that demands blood is just as effective here as it was in a show that found him grappling with how much power vigilantes should have. Robin Atkin Downes plays Manchester Black, the British punk leader of the Elites who has the perfect delivery of a cocky antagonist who loves to provoke Superman and explode with revolutionary rage. Pauley Perrette is a bit of an unconventional choice for Lois Lane but she really does shine for her key moments of discussing the tactics and morals of which Superman stands for.

Superman vs. The Elite does have its questionable patches of moral decisions here and there about Superman’s perceptions of violence and justice but it ultimately works out in the end to give a grander focus on the Man of Steel and his perception of vigilantism. There’s a lot of philosophical meat to this story for a film that ultimately ends up with Superman fighting a bunch of superpowered villains. We’ve seen that time and time again but here’s a film that positions the villains as being praised for their violence in a world that seems to crave such vengeance. Superman steps up to such chaos and finds a way to say not with more than just a punch to the jaw.