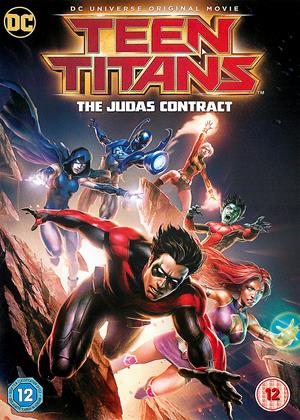 Rent other films like Teen Titans: The Judas Contract

There’s always been a twinge of the awkward when trying to weave a tale of the Teen Titans. The direct to video animated films haven’t had the best takes, given the embarrassing dance sequence of the previous film. But The Judas Project manages to find a stronger balance of the lives of young people and the superhero organization they formed. Maybe it’s the more adult story being told or maybe it’s the higher scaling of the ages. Whatever it is, these Teen Titans work better here than they have in previous films, even if they still don’t feel as a whole.

The latest member of the young group of heroes is Princess Starfire, rescued from her planet of Tamaran. Grateful, she joins the team and quickly forms a relationship with Robin, who turns to Nightwing with age, per the comic book lore. When they don’t find themselves taking down the likes of a new terrorist cult, Nightwing finally pops the big question to Starfire: Will she move into an apartment with him? They don’t even need children as they’ve already got their hands full keeping the rest of the Titans in check. The latest addition of Tera is having trouble with her powers of Earth and how much Beast Boys wants to date her. Blue Beetle is still dealing with the powers of his alien scarab that is making his family uncomfortable around him. It sounds odd when Raven seems to be the most well-adjusted member of the group given her demonic powers and daddy issues.

The villain scheme is nothing all that compelling. The crazy cult of Brother Blood is trying to summon a demonic power as it convinces members to follow the loud and ranting words of the leader, chanting along to hail the coming of a new overlord. You know, standard supernatural supervillain theatrics. The villain doing the dirty work, however, is Deathstroke, this time with a better personality than previous incarnations. He always keeps himself focused when working on infiltrating the Titans and finds just the right smart-ass remark to lay down when he’s winning, embodying a mirror-mirror Deadpool in his attitude and expertise.

While the action is pretty standard for the DC Comics PG-13 affair, including the obligatory beat punctuating curse word I’m sure gives the screenwriters goosebumps to hear in animation, it’s ultimately the performances and the music that won me over most. Miguel Ferrer perfectly plays Deathstroke with the right amount of crass and seriousness that is so uniquely Miguel and works well for the character. Christina Ricci also gives the right amount of low-key involvement in her role as Raven. But I found myself most fascinated by the atmosphere with the music by Frederik Wiedmann. He has composed music for many previous DC Comics animated movies but I found his score here most compelling about transforming teen melodrama into relatable adult drama.

It’s a bit of a shame that The Judas Contract spins too many webs of relationships that it never fully develops a compelling dynamic between the characters. I had a few laughs from the daring humor and a few thrills from the apocalyptic story but not much more than that. There’s just enough to be entertained but if the Teen Titans want to stick around, they’ve gotta put on more than the standard superhero affair. This production merely tacks on pleasing dressings of voice acting and music to make up for a standard superhero story. You know a film is on life support when the special guest star is Kevin Smith playing himself to interview Beast Boy on his podcast.