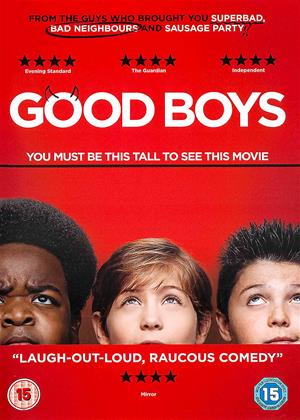 This is not children and family. - Good Boys review by SKC

Misandry and sexist cliches about teenage boys. Appalling. Not worth a look. Incorrectly categorized

This was much better than I thought it was going to be and very funny from start to finish. Well worth the wait to watch really enjoyed this movie

I am not a Big fan of Family Comedy ,but This is actually Very Funny, a Bit Dirty but in a Childlike way and well worth a watch .

Think 'The Hangover' but played by 5th Graders just reaching the 6th Grade and Questioning their place in School Heirachy ,Looming Manhood and Relationships.

Darkly Comic. But really Not a Kids Movie.

If you think this is a family comedy, you need to take a serious look at your family - Good Boys review by RD

I don't know what a sixth grade is, nor do I have any interest in finding out.

Isn't it ironic that the nation has voted to leave the EU, but are quite happy to be sumsumed by America?

This film seems like adult behavior projected onto children.

Too much hippity hoppity crap for my taste too.

It is amusing as long from a fantasy point of view.

How easy it would be to merely write off Good Boys as Superbad Jr or Superbad: The Next Generation? It’s easy because it’s astute. Born from the Seth Rogen school of comedy - being both a producer and minor character in the film - it’s a coming-of-age comedy where out of the mouths of babes spills silly vulgarity. Young boys will make wild discoveries in their suburban setting of sex, puberty, drugs, and all manner of profanity. Surprisingly, for a film where boys paw over a tampon with alien fascination, it’s not too shabby a raunchy comedy.

The trio of friends Max, Lucas, and Thor are venturing into the sixth grade with fascination and fear. Max has a crush, Lucas has parents getting a divorce, and Thor has a love of singing that he’s terrified to embrace. Their lives go from bad to worse when they get caught up in a scenario that involves a party, a drone, and some ecstasy that comes into their possession. What follows is a wild trip that takes from an adventure to the mall and a possible romantic encounter at an evening party.

So, yeah, major Superbad vibes with the one-crazy-day style of storytelling here. Much the banter one would come to expect from such a raunchy comedy arrive on schedule. The boys come across an indoor swing and find it be quite fun, only for a more insightful girl to break the news to them that it’s a sex swing. They’ll later have an awkward conversation with Rogen’s character about drugs where he plays the hypocrite adult who must conceal his many recreational devices while trying to make a point about boys being too young for such vices.

What ultimately makes the film shine brighter than usual is its fantastic performances by the young leads of the predictably strong Jacob Tremblay but also newcomers Keith Williams and Brady Noon. While it’s certainly easy to convince these kids to say such vulgar dialogue and enter odd situations, considering how much kids would love to get away with such talk, they perform admirably with real chemistry. It’s natural to expect that kind of comradery when kids can speak so frank with each other but it’s nonetheless charming to watch them connect and grow, amid sex dolls and all. They have an undeniable chipper edge that makes one root for them all the more.

It may sound like a negative criticism that the gags seem somewhat secondary to the real appeal of the characters, but this is more of a positive if anything. I’m honestly not all that enthralled nor shocked by the premise of boys bantering and cavorting in manner most inappropriate considering that’s been a bit of a bankful staging for years in numerous other low-brow comedies. What surprised and honestly made me enjoy the picture was the charisma of its leads and how well they can sell a bit. There’s something more impressive about a kid pulling off these bits that an adult would merely meander through for easy laughs. These kids are not just sitting on their nuts and hoping the script will fill in the humor for them. They have a natural comedic talent that works well enough that I wouldn’t say know to Good Teenagers, should a reunion film ever come about from this.