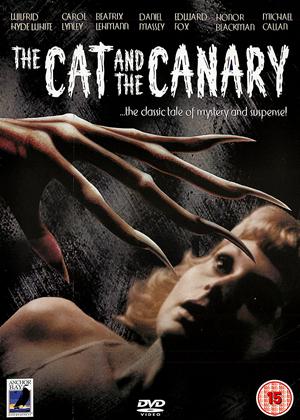 Synopsis:
When an elderly, rich curmudgeon dies he postpones the reading of his will until twenty years to the hour after his death. He believes all of his potential heirs are no good leeches, with a predilection for insanity. In order to collect the inheritance, his nervous family must spend the night in an old dark house. As the family retire for the evening, a psychiatrist arrives to alert them of an escaped killer. Naturally, no one gets much sleep and some won't make it through the night...
Actors:
Honor Blackman, Michael Callan, Edward Fox, Wendy Hiller, Olivia Hussey, Beatrix Lehmann, Carol Lynley, Daniel Massey, Peter McEnery, Wilfrid Hyde-White
Directors:
Radley Metzger
Writers:
Radley Metzger, John Willard
Studio:
Anchor Bay
Genres:
Comedy, Drama, Horror, Thrillers

Reviews (1) of The Cat and the Canary

If you're thinking of renting this disc, you'll be pleased to know that those hideously lo-res discoloured screenshots above do not represent the quality of the DVD, which (unlike some this company rents out) isn't substandard in any way. That's the good news.

Now the bad news. There are a surprising number of versions of this film, two of which might be considered minor classics. One is the original silent movie from 1927, whose influence lives on in its twin legacies: the Old Dark House sub-genre, and the Universal Studios horror franchise that gave us Karloff's Frankenstein, Lugosi's Dracula, and all those other beloved monsters that seem to have been around forever. The other is the 1939 Bob Hope comedy, which cheerfully admitted that even by then this kind of plot was old-fashioned, cliché-ridden, and downright absurd, and therefore made an ideal vehicle for Hope's trademark accidental and very reluctant hero who manages not to be a cowardly waste of space, but only just.

And then there's this incredibly belated and totally unnecessary remake which doesn't seem to know whether it's supposed to be funny or scary, and tries to send itself up and take itself seriously at the same time, achieving very little of either and not much of anything else. Which is odd when you look at the list of outrageously sleazy movies its producer Richard Gordon had previously been responsible for, such as "The Playgirls And The Vampire", "Secrets Of Sex", and "Voodoo Blood Death". You expect something a bit special from such a man!

But alas, you don't get it. Cardboard stereotypes who would be more at home in an Agatha Christie novel wander around a huge country house getting on each other's nerves. Some D-list actor who bears a vague physical resemblance to Bob Hope tries to copy Hope's schtick and succeeds only in showing us why Bob Hope is a very famous comedian and Michael Callan isn't. Some D-list actress who is only there to look pretty and be threatened does both and not much else. And Honor Blackman, typecast as a lesbian because she played one in "Goldfinger" in 1964, looks and acts exactly like an ageing star doing rubbish she hates because once your looks fade you have to take whatever work you can get. Though at least Edward Fox seems to having fun.

This isn't quite a one-star movie, but since there are only two possible ratings lower than "liked it" and I'd be lying if I implied it was almost good, one star is what it has to get. Because what point is there in a horror movie which never quite manages to horrify and spends three-quarters of its runtime not even trying to, or a comedy which wouldn't recognise a joke if one came along and shoved a whoopee cushion up its ooer missus? None at all, and this flatly directed non-thriller manages to be both of those at once. If it's comedy you're after, the low-budget indie spoof "Dark And Stormy Night" parodies this type of film far better, as does that Bob Hope movie from 1939, and both versions of "The Old Dark House", especially the first. And if you want horror, you'll see a lot more of that in just about any of the several million other films involving people in a house being stalked by a nutter with a knife.