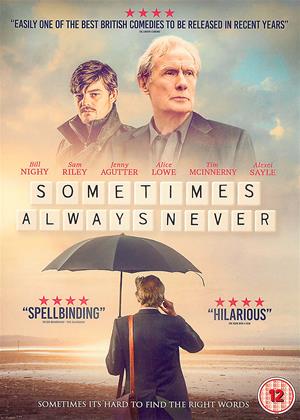 I don't know why the other reviewers have taken against this film. I really liked it. Its gentle and captivating, and could have been written for Bill Nighy. I found it sad and funny and well acted.  A little off-beat, but that's what really makes it.

Probably one of the worst films I've ever seen. If you're thinking of renting this don't bother. It's a slow storyline and from the backdrop it's obviously been done on the cheap, quite laughable in places

Mmm - one of those that attempts to deal with some serious themes (loss, grief, desire for familial connection etc) by being self-consciously 'charming', but for me I'm afraid both the acting and the production didn't match Frank Cottrell Boyce's clever, wry and witty script. The styling of the film seems to stand separately from the dialogue, which is realistic by comparison, and this, which includes an abundance of Wes Anderson-style symmetrical framing and frequent use of tongue-in-cheek title cards, only serves to distract the audience from what's going on rather than reinforce any emotive power the film might have, whilst the deliberately low-key performances just seem to lack depth and nuance to me. Add to all this a truly horrible sentimental ending, I'm coming away thinking this one, though admittedly watchable, could have been so much better, sadly.

I loved this film, it is in a very particular style which by the look of other reviews many don’t like.I thought it was visually clever and often beautiful, creating a game like look to the piece. It is quirky, gentle, and loving towards its characters. Almost like a modern Chekhov short story .

I can see why some people might find this film boring and a bit weird but my friends and I enjoyed it. I often find I enjoy films other people review as boring so have learnt to see it as a sign that this film might be worth watching. I think it is amusing and different; there was review I found online from The Times which was quite nice about the film, I agree with what that review says.

Well written, witty film. I was surprised how much I enjoyed it, but of course you don't get acting talent like this (Nighy, Riley, Lowe, McInnerny and Agutter) with a bad script.

This won't work for people who like blockbusters or Hollywood largesse, and I guess that is where some of the more negative reviews come from.

A waste of talent - Sometimes Always Never review by George

Bill Nighy is a good actor, so we assumed this would be a good film. We were really disappointed. Nothing ever seemed to happen so we just gave up after waiting for some action which never came. It should have been titled "never,never,never".

Is this meant to be a comedy or is it a drama because it was neither funny nor dramatic? The kind of movie where you think something interesting is about to happen but it never does. Couldn't care less about any of the characters or whether or not he found his missing son. Don't waste your time and money.

We discover through a series of cameos that Mellor (Nighy) brought up two boys on his own as best he could and is a Scrabble fiend and imbued his kids with a love hate relationship with the game. Tragedy hits and the film explores his character and how he is dealing with living with the tragic circumstances and the impact on his extended family. The film is probably low budget, as other commenters have said but so what. The film is beautifully lit to enhance the colorisation which, together with the camera angles gives it a Comic and at times surreal feel. If you go with it and enjoy it as art, you can concentrate on the performances. The cameos by Tim McInery and Jenny Agutter are particularly memorable. The relationship of the Grandson with Mellor and transformation of the grandson is charming. Based on some of the reviews I imagined I would be wasting my time. I am so glad I ignored them. Loved this film.

Bill Night charmingly poignant as ever in this examination of loss and grief. Lovely stylish mise en scene and intelligent diegesis. Great supporting cast - plus a clever mad couple of minutes from Alexei Sayle. The title isn't quite right for the theme which makes me suspect that some connections were left on the cutting room floor. Do watch the deleted scene: you can see why they cut it, but it adds some information that you might be glad to have.