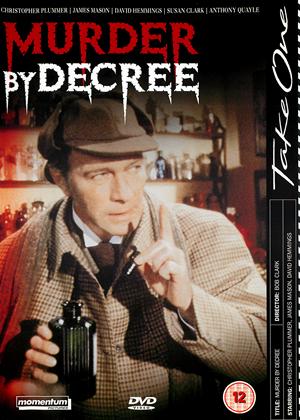 Reviews (2) of Murder by Decree

Murder By Decree is a warm, and by contrast has violent content connected with the searching of a Mother and Baby.

Although some of the content is appalling there are some great moments and an excellent cast which contribute to a Light and Dark story-line.

I have to confess my favourite bit is when Sherlock is summoned to government chamber with the Home Secretary, and Prime Minister and the Commissioner of police being chastised BY Sherlock and the conversations that run through is nothing short of Magnificent.

The is a well thought out Film and entirely absorbing.

Any Sherlock Holmes Fan should be satisfied with this. Enjoy !!!

A Masterclass - Murder by Decree review by JJ

Murder by Decree is not just another Sherlock Holmes film it is for me possible one of the best Holmes films there is, now there have been several such telling's of this tale and although good they are missing something which this film has in abundance, and that is a story to tell.

This film takes the story of a Princes indiscretion and wraps it up into the lore of jack the Ripper and Government cover up in such a way that it is hard not to think of them both being one.

Christopher Plummer plays a impassioned Holmes which is beautifully counter-balanced by James Mason as Dr. Watson, for me this teaming of Plummer and Mason makes for the best Holmes and Watson you will see.

The supporting cast is also well placed with the likes of David Hemmings, Anthony Quayle,Donald Sutherland,Geneviève Bujold and Frank Finlay and Sir John Gielgud as the Prime Minister.

For me to go into any depth on this movie would dilute you'r future enjoyment of this film.

This is one of those gems that seems to be forgotten today where films rely on special effect and gore to tell a tall, this film rely's on a good script and some very fine acting for that, and that alone should be enough for it to be watch time and time again.