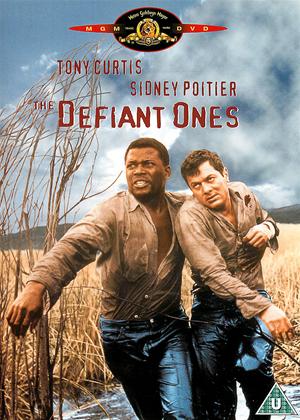 Reviews (1) of The Defiant Ones

More important than good? - The Defiant Ones review by RJ

The interview with Kim Newman on the Blu-ray (which I watched after watching the film) helped to put The Defiant Ones into context for me, because - despite flattering myself that I'm reasonably well informed about films - it exposed yet more gaps in my knowledge. I didn't know a thing about Stanley Kramer, apart from gathering via Wikipedia that he was known as a director of 'message' films. Newman's way of putting it is that Kramer was 'more important than good'. Thankfully, The Defiant Ones seems to be regarded by many as one of Kramer's best. I enjoyed it and whilst it certainly isn't a subtle film I didn't find it too heavy-handed or overly preachy.

It's a simple story with good performances from Curtis and Poitier. Newman's interview also made some useful points about where Curtis and Poitier were in their respective careers at this point in time - Curtis looking to be taken seriously and Poitier not yet typecast as the 'dignified negro'. I thought they were both good in a film in which the script tries with variable success to portray them both as believable characters and as ciphers for the film's message about mutual understanding and cooperation (specifically between races but also more generally). There's great support from the likes of Theodore Bikel and Lon Chaney Jr. which helps to add a bit of colour and interest into the otherwise less-than-thrilling and episodic pursuit of the convicts. It also had a satisfyingly bleak ending, which Newman posits was due to the demands of censorship at that time - if that was the case, then I'm grateful to censorship on this occasion.

The film looks stunning (it was no surprise to discover it won an Oscar for best black and white cinematography) and, cleverly, there is no non-diegetic music used. This heightens the realism of the film by allowing us to hear the rain pouring down, the sounds of the birds and bugs, and the squelching of footsteps as both convicts and pursuers make their way through the swamps and bogs. Often with films of this period and earlier, the overwrought musical scores are my least favourite aspect, so this was a welcome relief.

I think I am happy to accept the consensus that, overall, Kramer was 'more important than good' - but I think in this film the balance between important and good was fairly even, and I found it a solid, enjoyable watch.