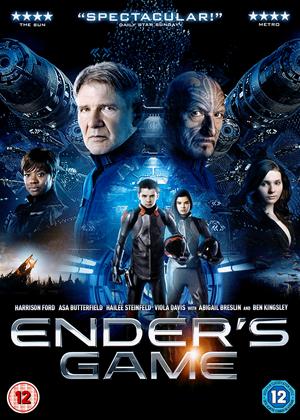 I feel a bit mean criticising something as original as this, foregoing the usual special effects laden finish for something much more thoughtful. However, it is very straight faced and a little bit slow at times which causes the interesting storyline to lag. Asa Butterfield is very good in the title role (although he has always given me the creeps since he was in Merlin) and Harrison Ford provides gruff Commander duties accordingly. Unfortunately the likes of Hailee Steinfeld and Ben Kinglsey are given very little to do. Some of the casting is also off the wall, who thought the kid from Hannah Montana would make a good tough Sarge was strongly mistaken. A good thought provoking film but younger viewers may find it a bit slow.

Mildly entertaining; but not great. Too cliche'd.

This sentence is here just to get to 100 words as I have nothing else to add.

Enjoyed it the once - Ender's Game review by gazmb

I enjoyed this story but for me it didn't keep me gripped into watching it. Its quite slow in places . The main actor is quite young and does a great job in his role . Found the film aimed at a young audiance but I think they would find it to slow and boring.

I think Harrison Ford is hugely over-rated as an actor. Asa Butterfield however is a brilliant child actor and carries the plot. This is a boy super hero film and as such aimed at boys, not my demographic but still enjoyed it.

Good Lord, whatever possessed me to hire this film? Answer: my growing admiration for Asa Butterfield, who indeed is about the only redeeming feature on it. I quickly admit that as a bit of a snob -intellectual I try to stay away from mainstream, special-effects-heavy Hollywood fodder, so for all I know this is actually good for the standards, I confess I am in no position to judge. But I better not start moaning about the clichéd (from a biological point of view) alien beings, unconvincing bullying, soon-to-look-embarrassingly-dated interstellar war effects and shoehorned moral lessons about overpopulation and human emotions because when I think that this brilliant young actor could have been used to make a really clever, multi-layered, subtle Sci Fi film along the lines of "Stalker" or "Solaris", I feel like weeping. So… 1 star to film, 4 stars to Butterfield.

For someone unaware of the series of novels Enders Game is based on I found the premise exciting and full of possibilities and while there is an element of playing it safe, Gavin Hood’s first instalment in this potential franchise is a rich psychological sci-fi that features some great child actors and Harrison Ford giving his best grouch.

Based on Orson Scott Card’s series of novels, Ender’s Game follows Ender Wiggin (Asa Butterfield), a genetically gifted teenager who could well be mankinds only hope at surviving the potential attack of a mysterious race called the Formics. However Ender, under the tutelage of Colonel Graff (Ford) finds himself struggling to maintain his humanity and keep his inner rage in check as the threat of the alien forces begins to rise and Graff demands more and more from him.

Ender’s self obsession with his own psyche makes for some excellent psychological filmmaking and Butterfield sells it but never overstates what the script skillfully lays out. While you can find hidden meaning within the films borderline childish premise, Ender’s Game works as a light hearted and visceral action film, one accessible for everyone, including kids.

The film while overly long makes up for it with some cracking acting from Butterfield, Ford, Viola Davis and a woefully underused Abigail Breslin who provides the films much needed heart. The film, while set in the cold of space is a deeply human and warm film about the corruption and completion of Ender Wiggin, a complex and underappreciated character I would happily watch again if the series were to continue.

Filmed with a keen eye for detail and an understanding of the vast emptiness of space, Ender’s Game kept me on the edge of my seat for almost the entire run, save for its confusing ending, one that feels rushed and unconvincing but never ruins the exceptional story and ideas Hood developed into this delightful picture.