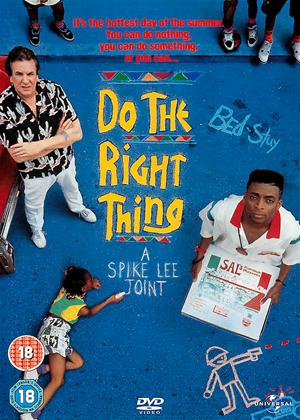 Reviews (2) of Do the Right Thing

Could this be Spike Lee's best film....... - Do the Right Thing review by CP Customer

Do the Right Thing follows a day in the life of Mookie, an intelligent but lazy Spike Lee who delivers Sals Finest Pizzas around his neighbourhood in Brooklyn. It's the hottest day of the year and the film builds as tensions between the blacks, whites, italians, hispanics,koreans, parents and children start to boil over...

But that's not the point - the point is that all these people seem to live together happily until a series of insignificant events expose the prejudice lurking below the surface. It doesn't preach, it's colourful, lively, full of humour, it has great music, great performances from Danny Aiello, John Turturro, Ossie Davis and Spike Lee.

Don't expect New Jack City gunfights or drive-by shootings, it isn't that kind of film, it's about real people and the irrational ways they react when forced to live in tight communities.

I first saw this film years ago but it hasn't dated at all.The core message is just as relevant to any British city now as it was to Brooklyn when it was made.

Timely movie - Do the Right Thing review by JG

This could have been written about race issues today, a re run of the killing of George floyd, shameful that we haven’t made more progress as a society. Powerful messages delivered in a powerful way, no holds barred, you can feel the heat and the tension coming off the movie, a must see