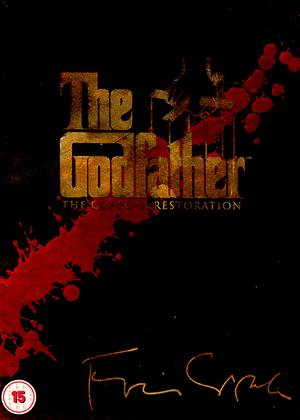 Reviews (4) of The Godfather Trilogy

The family - The Godfather Trilogy review by CP Customer

An impeccable film from start to finish, this is undoubtedly an American classic. The attention to detail, script and all-star cast ensure that this is for many one of the greatest films of all time. Returning to it now, the performances are still mesmerising and the struggles of the Corleone family sow the seeds of what was to come in series. They certainly don’t make films like this anymore, or sadly ever will again.

I've recently taken the opportunity to see (again!) the 'Godfather' trilogy. The original film in the series was made waaaaay back in 1972, 'Godfather Part II' in 1974 and 'Godfather Part III' in 1990. Strictly speaking, I'm not seeing it 'again' as I can't even remember seeing the 3rd film before. Perhaps that's because it really isn't up to the high standard set by the first two films... 'The Godfather' won 3 Oscars, is #2 on the IMDB Top 250 (and 'Part II' is #3), and catch phrases from the film have entered popular culture: "I'll make him an offer he can't refuse" and "bada bing" come to mind. Although the film is now 40 years old it doesn't feel dated. It was the film that gave Al Pacino his first big role and he really is the star of the film, although the 'Best Actor' Oscar went to Marlon Brando – and yes, he's very good. In fact all the actors are excellent. The film is perhaps the first to take a gangster's-eye view of society (rather than the more usual condemnation of the criminal fraternity) and led to further films and TV series from that viewpoint such as 'Goodfellas', 'The Sopranos' etc. 'The Godfather' is one of my favourite films, I rate it 5/5 stars. Go watch it – or I'll make you an offer you can't refuse :)

Third time lucky - The Godfather Trilogy review by BE

I saw this movie when it first came out back in the early 70s. I didn't particularly like it. I had difficulty understanding who all the characters were, found Don Corleone's speech very unclear and had difficulty relating to the Mafia. I saw it many years later but still felt very muddled by the storyline and the characters. I have just watched it again, over forty years later, with subtitles on and the synopsis to hand on the iPad. These were a great help with the story and being able to identify all the characters. Viewed from a wider perspective, I found it thoroughly engrossing The main draw this time, as well as the forever brilliant Marlon Brando, was Al Pacino. I now appreciate him for the really great actor he has matured into. I am now well looking forward to seeing Godfather II and trust it will be as flawless a production as this one.

I enjoyed all the films and I have seen them all many many times.

All the three Films are an art Form despite the brutality and corruption from the Corleon and their rivals and other so called law enforcer types.

Within The films them selves there are Beautiful and Moving Family Moments. Whenever there was a magic family moment The tapping of the crystal glass with a spoon and calling out in Italian "100 Years More"

Some great acting performances from all the leading players.

The only thing that has spoiled it for me is the aging of the of the film and one copy does look it has not been recorded very well.

I still heartily Recommend the whole Trilogy. Even if the last one is a little too neatly wrapped at the end.