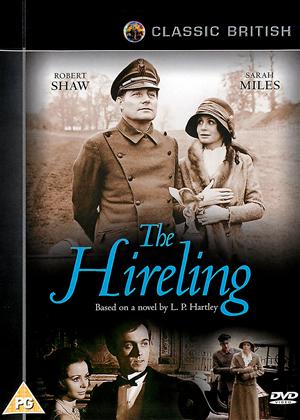 Synopsis:
Shattered by the death of her husband, Lady Helen Franklin (Sarah Miles) is confined to a sanatorium. When she is at last released, she struggles to rebuild her life, striking up a nervous and hesitant relationship with her chauffeur, Steven Ledbetter (Robert Shaw). As the months progress, Lady Helen becomes more and more reliant on his company and Steven finds himself drawn to Lady Helen in turn. The promise of a forbidden relationship hangs over them - until Lady Helen meets the charming and aristocratic Captain Hugh Cantrip (Peter Egan), her social equal.
What Lady Helen doesn't know is that both the roughly hewn Ledbetter and the smooth Cantrip are concealing secrets from her - and that she is trapped in a love triangle that could explode into a violent and heartbreaking confrontation...
Actors:
Robert Shaw, Sarah Miles, Peter Egan, Caroline Mortimer, Elizabeth Sellars, Ian Hogg, Christine Hargreaves, Lyndon Brook, Patricia Lawrence, Petra Markham, Ernest C. Jennings, Alison Leggatt, Eric Kent, Don McKillop, Alec Wallis
Directors:
Alan Bridges
Writers:
L.P. Hartley, Wolf Mankowitz
Others:
Phyllis Dalton, Natasha Kroll
Studio:
Sony
Genres:
British Films, Drama, Romance
Countries:
UK
Awards:

Reviews (2) of The Hireling

Driving Without Due Care And Attention. - The Hireling review by NC

There have been a few bizarre winners of the Cannes Palme D'Or (Friendly Persuasion!!) and 'The Hireling has to count as one of them. It's a perfectly good film - but then so are hundreds of others. Yes, the photography is superb. Yes, the acting is good. But it is a struggle to see what else may have impressed the judges so much.

We are in L.P. Hartley country - he may have been a part of the landed rich, but plainly had little time for the ignorance and atrocious manners of many of the people he saw around him. There are withering depictions of Lady Franklin's mother, and the family's friends and neighbours. It's been so long since I read the book that I cannot recall if the severest scorn is reserved for Ledbetter, the car-and-chauffeur-hire firm owner, but the film lays into him with a stick. While he's the epitome of polite correctness with his clients, if there is anyone he can possibly treat like dirt, (i.e. those he figures his inferior), he does so - with bells on.

It is 1923, and the country is a long way short of 'a land fit for heroes'. Prospective M.P.'s still see the job as nothing but personal ambition and a way of getting rich. The class barrier is as rigid and impervious as ever (Lady Franklin watches the poor through the window of the Rolls Royce). And all the patriotic bull of the war has had its effect: a short scene in a pub shows Ledbetter to be a moronic racist thug.

As the film starts it looks as if we are in for one of those familiar roles from Sarah Miles:- nervy, slightly unbalanced, a voice so quick and quiet it's difficult to register. Her character, Lady Franklin, has had a nervous breakdown after the death of her husband. It turns out that Ledbetter is the only person she has contact with that treats her with respect and courtesy - to begin with because he's paid for it. As she recovers, mainly due to the drives and conversations with the chauffeur, so Sarah Miles displays real acting skills: becoming more confident, clearer in speech, upright, walking with assurance. It's a very fine performance. Robert Shaw's career veered between the serious ('The Birthday Party', 'The Caretaker') and the less than serious ('From Russia With Love', 'Jaws'). He's good at the stiff, stolid demeanour he shows to 'milady'; less so when his ambitions, both personal and professional, go off the rails, and repressed emotions boil over. Alan Bridges, director of many television programmes (episodes of 'Play of the Month' and 'Play for Today') conducts with a sort of arid, or at least parched, efficiency.

'The Hireling' almost feels like a good episode of 'Armchair Theatre', extended and broadened out into a full feature. Maybe it is the opening out of what is essentially a chamber piece that is its weakness.

A good film, but first prize at Cannes? it must have been a poor year of submissions.

One of the worst! - The Hireling review by MW

I rarely write film reviews, but this time I had to! I ordered 'The Hireling' as I'd just read the book and really enjoyed it. I found that the film was one of the worst adaptations of a book that I've ever seen. It began well enough, but the interesting relationship between the two main characters was sadly ignored, especially towards the end of the film.

I believe that L P Hartley died just before the film was released, or maybe he watched it and then died. It's an insult to a beautiful book with a sensitive story.