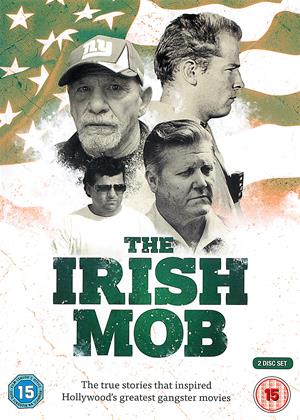 Synopsis:
A tale of shamrocks and sub-machine guns, this captivating documentary series spans more than 100 years of history to chart the extraordinary rise of the Irish Mob in America. From the Irish gangs of New York in the late 1800's through to the 1970's, this documentary tells the amazing stories of the first generation Irish kids who became some of America's most notorious and wanted gangsters.
It explores the lives and crimes of key members of the Irish Mob including Gangs of New York graduate Owney 'Killer' Madden, Jimmy Coonan's infamous Westies gang from Hell's Kitchen, America's most wanted Frankie Sheeran and the recently captured James 'Whitey' Bulger (portrayed by Johnny Depp in hit movie Black Mass). The Irish gangster story represents the American Dream' in its totality - the idea that a kid from the gutter can rise to power, money and class, through whatever means necessary. With contributions from Pulitzer Prize winning authors, the gangsters themselves, family members and the cops who chased them down, this is the definitive story of the Irish Mob in America, told in its entirety for the first time.
Actors:
Aidan Higgins, Eamonn Draper, Michael Kinsella, Joseph Lydon, Liam Alex Heffron, Mattie Hynes, Alastair Mac Aindreasa, Joe Nicholson, Seán Óg Ó Duinín
Directors:
Dathaí Keane
Producers:
Eileen Joyce, Bríd Seoighe, Eileen Seoighe, Pierce Boyce
Narrated By:
Steve Wall
Writers:
Dathaí Keane, Pierce Boyce
Aka:
Mobs Mheiriceá
Studio:
Koch Media
Genres:
TV Crimes, TV Documentaries
Countries:
Ireland

Reviews of The Irish Mob

The Irish Mob is directed by Dathaí Keane, and stars Aidan Higgins, Michael Kinsella, Eamonn Draper, Joe Lydon, Liam Alex Heffron, Joe Nicholson, Mattie Hynes, Seán Óg Ó Duinín, and Alastair Mac Aindreasa in the main roles. These actors portray some of the most fierce Irish mobsters in recent years, including Michael "King Mike" McDonald, Owney Madden, Jack "Legs" Diamond, Dion O'Banion, John "Cockeye" Dunne, Danny Greene, Jimmy Burke, Dominic Ceremo, and Henry Hill. All of these fellows work together to establish a gangster Empire and also cement their names in history as one of the most notorious people to have ever walked the American soil; to this extent, The Irish Mob does not disappoint in the slightest.

The series does jump around a bit, which is expected due to the fact that the material it’s based on does that as well. This is mainly because the real-world gangsters were in close relation to one another in one way or the other full stop. They were operating, unbeknownst to the governments at the time, in close proximity to each other even though they seemed thinly stretched across the territory of the United States of America. This makes the show that much more interesting to invest your time in, and it’s all for the better because of it.

The series received a major nomination/honor from the most relevant Irish cinema platform – the Irish Oscar (held by the Irish Film and Television Academy Award). Although Keane’s piece didn’t manage to snatch the award, it’s still considered as one of the more prominent Irish offerings in recent years, and here’s why.

The Irish Mob features a highly-entertaining narrative told through the perspective of the mobsters. Rather, the story is told via the lens of a constricted narrator who does his best to omit relevant results and facts in order to achieve a greater pathos during a dramatic reveal down the road. This serves three main purposes: first, it builds unparalleled suspense (over which most average documentary shows are guilty of NOT doing); second, it makes the audience’s involvement that more poignant and tangible; and third and final, it makes us care about what’s happening on-screen – something that a lesser director/storyteller would’ve probably bottled if given the opportunity, the budget ($600,000), and the chance.

Overall, The Irish Mob is an entertaining piece of historical entertainment/reenactment about what was life like back in the 20th century in industrial progressive America, as told through the lives of several key figures from the Irish organized crime. If you happened to like Goodfellas, Casino, The Godfather, and other films of the same nature, then you should definitely put The Irish Mob on your bucket list – the sooner, the better.