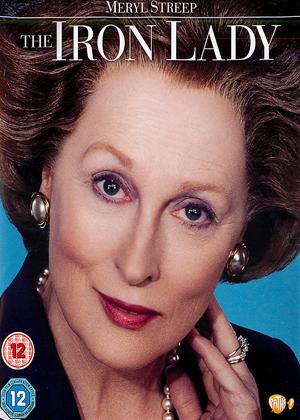 Reviews (2) of The Iron Lady

I've seen this at the cinema so thought I'd give it a review in advance of it being available for rental. I had read mixed reviews but was looking forward to seeing it as I wanted to see what the film industry made of a period of British history which I experienced directly; also it's unusual to find a biopic of a person still alive. I regret to say that the film was disappointing, but Meryl Streep gave a quite uncanny performance (helped by heavy prosthetic makeup at times), so much so that it was almost an impersonation. The film is told in flashback, the memories of an old woman in decline, a sad decline due to the onset of Alzheimer's. The central character is very much Margaret Thatcher, but the supporting characters are weakly portrayed. For example, her husband was a millionaire businessman in his own right and not merely a cartoonish character who poured drinks. The politics is skimmed over – but a little analysis as to why Mrs Thatcher polarised opinion so much, from admiration to outright hatred, would not have gone amiss. The snapshot views of her life were just too far apart to form any structure as were the few political events shown. Many key events were missing entirely, others over-shortened, others the subject of mistakes or inaccuracies. When it is available for rental I'll probably view it again to see if my impressions are confirmed. I rate it 3/5 stars – but if it hadn't been for Streep's performance it would have been 2/5.

Without Streep's central impersonation of Thatcher, this film would get 2 stars or less. However, I do have to say thet Streep gets the accent and mannerisms spot-on, which is what the whole movie is about. BUT there are some real errors in this film: 1) Mrs Thatcher is not the senile old dear as the movie portrays, losing her mind - reports say she is absolutely not like that (Raegan was though); 2)There is no way Thatcher would go to the local shop to buy a bottle of milk!; 3) When Thatcher entered parliament she was NOT the only woman as portrayed here (conveniently, to make a pity party feminist point) - there was Shirley Williams, Barbara Castle and more - and there should have been shown! Sadly, this film is NOT about politics: the story of Thatcher is told through the well-worn Hollywood template of ' a woman's journey in a man's world - and she succeeds in the end': it is essentially a film portraying the American dream, in politically correct ways. The writer, Abi Morgan, oftenh writes these empathetic portrayals of 'strong' women. But really, this is not accurate - Miss Roberts married a millionaire upper class businessmand, for a start, and that is what enabled her to study law and be a politician! ONE THING I loved, however, was hearing the name of the town ' Dartford' (where Thatcher first tried to be an MP, in a major movie - a first, I think (though a Rollings Stones are from there too - Jaggera nd Richards anyway). SO all in all, worth watching for Streep alone (her Oscar was deserved, and often goes to actors made to age in movies, so she was a shoo-in). Thanfully, this did not win the best movie oscar - it did not even desrve to be nominated. IN CONCLUSION: a good movies for Americans, made for them, and pandering to their prejudices about Britain (or 'England' as they say) being backwards and sexist. Many probably think Thatcher is the Queen anyway though! If you want to watch a good film about Thatcher, then watch the TV drams Long Walk to Finchley and Margaret - better dramas by far, and about politics, not feminism.

Probably the most hated British Prime Minister yet Margaret Thatcher over saw the United Kingdom through huge unemployment, union strikes and far flung wars, it can not be denied that, love her or hate her, she certainly made an impression.

The same can not really be said for the biographical movie of her life however; taking the safe route rather than choosing a definitive stand point; The Iron Lady could have made a real statement, instead it whimpers rather pathetically in the shadows, something you would never expect of Thatcher herself.

It is not the plot that fails the picture, but rather the way the story has been handled, the movie lacks any genuine emotional strength, presenting a fairly placid version of events from all sides. Had the film makers been brave enough to give the movie a backbone, whether it be the controversial pro-Thatcher stance or the incessant hatred of the left wing liberals, then the Iron Lady might have made more of an impact. The movie shys away from the political however, taking a personal and dramatic look at Thatcher’s life after leaving power.

Streep’s performance as the woman herself is utterly flawless and well deserving of the Academy Award, it is not enough to truly get the Iron Lady going however, as both she and her male counterpart Jim Broadbent are given little to work with beyond a rather obvious post-power house guilt trip.

All in all the Iron Lady fails to fully commit to a concept and is therefore not really worth two hours of your own time to.