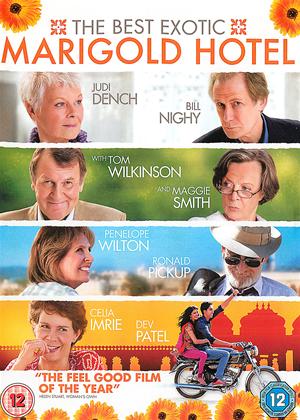 Rent other films like The Best Exotic Marigold Hotel

I groaned on occasion in the first few minutes of this film. Was it the joy at seeing Judi Dench united at last with Bill Nighy? Nope - it was the age of the jokes, which were dated in the 1980s! There are also characters here which are well past their sellby date: Maggie Smith's caryoon character racist is embarrassingly old-0fashioned and unrealistics - people like this existed in the 1950s or 60s maybe - not now. The old joke in a hospital when she asks for an English doctor and Mr Singh or someone shows up is straight from Dick Emery or Benny Hill in the 1970s. It feels sometimes as if the movie is 1) trying to make a movie that will sell well in the Indian market, riding the wave oif Slumdog millionaire; and 2) trying to tick off social issues boxes: racism, tick; gay issues, tick; health issues, tick. The plot is older than then crumbling hotel featured - and it's all about as realistic as Jurassic Park. But but but - as the film goes on it does exude a certain charm, with the gay subplot superbly handled (the race subplot is so clumsily handled by contrast), and the issues of oldies and what they do is one often not seen on film. It's all whimsy and fantasy of course - but it is based on a novel, so I presume a lot of that comes from the book (very much a woman;s romantic relationship book by a female writer). I award it 3.5 stars.

The Best Exotic Marigold Hotel is a situation comedy in which a handful of some of Britain finest theatrical actors stay in a run down Indian mansion and get into a lot of mischief.

There is very little else to this movie’s narrative and that in itself says quite a lot. The reference to the “grey pound” (the untapped wealth of the middle class post pension aged demographic) in the early minutes of the movie sum up the concept behind Best Exotic quite well, someone somewhere realized it would be a good idea to make a film that’s a bit like Passage to India, starring actors of a certain age, to help lure in an audience of a certain age.

Goodness knows what possessed the cast to agree to this incredibly unimaginative British rom-com, but their presences at least make the piece bearable; Judi Dench, Celia Imrie, Bill Nighy, Maggie Smith, Ronald Pickup, Tom Wilkinson and Penelope Wilton play a variety of single characteristic stereotypes of the British middle aged middle class acting up abroad, it’s an 18 to 30’s holiday with less sex, drugs and rock or roll and more blatant racial stereotypes and over extravagant settings. Not that we get to see a great deal of the local countryside during the movie’s runtime, other than a few brief references to a “fabulous temple” or two.

No matter how much high calibre talent has been employed in The Best Exotic Marigold Hotel it remains a distinctly average movie that relies on old stereotypes that will only be recognizable to an older audience.