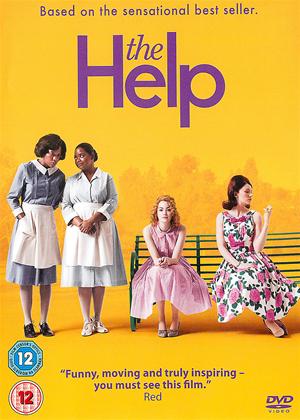 Sanitised, superficial and just too pretty-pretty - The Help review by RP

I saw this at the cinema and my impressions then were confirmed as I watched it again at home...

It's a sanitised, white man's version of life in the US deep south in the 1960s. Yes, there are some uncomfortable facts about the seemingly idyllic life of the rich white women and their families contrasted with the lives of their domestic servants, but I found it very superficial and just too pretty-pretty.

I should have said that it's a white woman's version, as it is taken from the book by Kathryn Stockett based on her own + retold maids' lives and experiences in Jackson, Mississippi. The film has a bit of tugging at the heartstrings, a bit of humour, but is generally uplifting - however, the book does have some darker moments. What it most certainly is not is any realistic historical record - I suspect the reality if told by a black author would be very much darker still. The film - and the book - is just clichéd and simplistic.

My wife liked this very much. I found it very average and rate it 3/5 stars, and that's stretching it.

Exceptional and unique - The Help review by Swambi

This film is excellent in all respects, well filmed, with beautiful scenery and music, excellently acted, taking you right back in to the 60's in the American south. Very emotional. If you like humanity and 'real life' drama, hope and human interaction, you will enjoy this.

Agree with Critic review - The Help review by CP Customer

Both my husband and I enjoyed this film and both laughed and felt for the situations. 140 minutes went by very quickly! Recommended

A Beautiful Film - The Help review by DB

I really loved this film. It's interesting how the truth about racism in America is finally coming out. This is a heartwarming film which shows extraordinary courage in the face of a socially repressed and ordered society in which the blacks are right at the bottom. You will hate the perpetrators of this disgraceful racist behaviour but I am sure you will love the film and its outcome. It approaches the subject with a sense of humour and parts of it are very funny and touching. The ostracised white wife who becomes a friend of her black maid and so on. It's great and enjoyable but takes a good swipe at racism in America at the same time. Though I suspect the reality may well have been worse it is still a great watch.

Help - The Help review by SH

The film that earned Octavia Spencer an Oscar for Best Supporting Actress The Help tells the story of an aspiring author who is inspired to publish the stories of black maids working in the American South during the 1950’s.

With a wealth of hugely impressive performances including that of Oscar nominee Viola Davis and a surprisingly impressive portrayal from Emma Stone as writer Skeeter, The Help was a pleasant surprise in many ways. Spencer’s Oscar is hugely well deserved, as her sparky character steals all the attention when on screen, whilst Davis’ portrayal of the patient but hopeful Aibileen is moving and courageous. The turn around from Zombieland’s Emma Stone leaves her almost unrecognisable as the opinionated white author determined to tell a story she cares about.

The movie begins precisely as one would expect it to and quite quickly I had the piece defined as simpering and unimaginative; another rather poor telling of the struggle for civil rights in the US in the fifties and sixties. My mind was swiftly changed however when, without even seeming to notice, I was engulfed in the story, loving and hating characters with the passion and zeal that can only be brought about by excellent writing and incredible screen presence.

The final quarter of the movie takes another slightly unimaginative turn, as things begin to wind down; injustices are rectified and relationships reconciled, leaving this bravely real movie heading toward a typical and predictable Hollywood ending. I encourage you to stay in your seats however, as The Help will not disappoint you, even in it’s final moments, as it takes tragedy and reality and weaves them into this smart, incredibly well made and loveable movie.

Controversially I believe The Help deserved more acclaim that some of its Oscar winning counterparts.