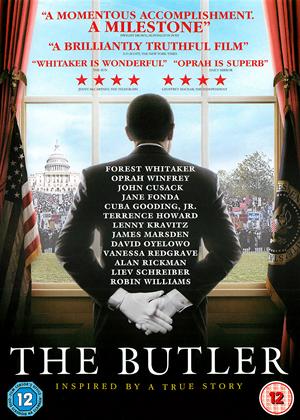 Reviews (2) of The Butler

This is a worthy film. It seeks to relate the tale of America's civil rights struggle through the eyes of a man who served eight presidents at the White House. Now there is nothing wrong with this per se. It is a history worth recording, reinforcing and remembering. But if you are going to do this, it needs to be done accurately. Schindlers List sets the bar here - it takes some dramatic licence, but the facts of the story are true, and the attention to detail elsewhere makes this acceptable. Another example, closer to this subject matter, is Malcolm X. For me, the Butler fails to get the balance right - in fact it gets it very wrong.

I watched this film understanding it was a dramatisation of true life events. Throughout the film, there were plotlines which puzzled me - they seemed to far-fetched to be true. Without giving away spoilers, I found it difficult to believe the activities of his son would not have consequences for the Butler's employment prospects; they certainly would today. Afterwards, I went to see how much of the film was actually true. Well, there was a man who worked at the White House for eight presidents. Pretty much every other event in the Butler's life was a fiction.

It saddens me. There are films to be made here, great stories to be told, that deal with complex histories and simple truths. Films like the butler make them less likely, and demean the history they seek to relate.

worth watching - The Butler review by gazmb

This film is about racism in America, from the view of Cecil Gaines who is a butler working in the White House. Great acting from everyone in the film. I found it quite an eye opener of horrible racism.

Directed by The Paperboy’s Lee Daniels, The Butler is based on the real story of an African American White House Butler who served 8 sitting presidents before retiring. While at times this story may feel slightly one note there is no denying this impressive story and the passion with which it is told.

The Butler follows Cecil Gaines (Forrest Whitaker) and his life and career as a butler in the White House. While he serves a number of presidents he has to handle worries at home with his political son Louis (David Oyelowo) and his wife Gloria (Oprah Winfrey). Over the years Cecil is exposed to some of the most important moments in American civil rights history.

It’s easy to watch this film and simplify it as a film about racism in America but ultimately its about the different routes to change, the power of activism and the power of kindness. As Louis fights oppression, Cecil watches and serves and moves even the most stubborn of presidents.

Featuring some great cameos by Robin Williams, James Marsden and Alan Rickman as Eisenhower, Kennedy and Reagan, the latter of which is perfect as the slick peoples president. However the film is held up solely by Forrest Whitaker who makes Cecil a kind yet set in his ways man. His performance elevates everyone else on screen from Winfrey (in her first live action film role since 1998) to Cuba Gooding Jr, who returns to form to play fellow butler Carter Wilson.

The story itself is a fast paced yet ponderous affair through the civil rights movement as shown through the eyes of each sitting president under the watchful eyes of Cecil. From the early days of peaceful protest to the violence of the Black Panthers, the film captures an America at war with itself as it fights its outdated thinking.

If anything Lee Daniels has brought together an exceptional cast to tell a relevant and emotional story that carries with it a depth of history and heart even if it can at times get a little bit preachy.