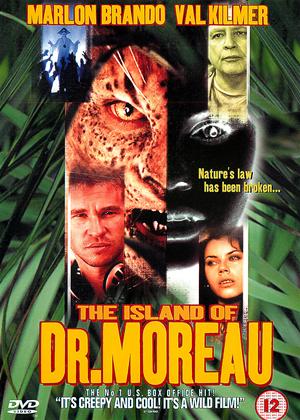 Reviews (1) of The Island of Dr. Moreau

This is adapted from the story by HG Wells in 1896, which was famously filmed as ‘The Island of Lost Souls’ in 1932, concerning animal/human hybrids.

Initially, Douglas’s (David Thewlis) disrespectful comments about Moreau’s cross-bred children, whilst in their presence, grinds alongside their exemplary manners. Indeed, the agent is told there is not one note of malice in them. However, it soon becomes obvious that Moreau’s control over them is far from humane, and the good doctor is – not that there was ever much doubt – insane.

Marlon Brando wrestles with an upper-crust British accent and some outsized false teeth. The accent is perfect, the prosthetics less so, rendering occasional moments of dialogue incomprehensible. His performance though, is terrific. Dangerous and a lot of fun. From his first appearance, draped in white, outsized sunglasses and a full face smothered in white ‘sunblock’, he is delightfully bizarre.

The film loses something when Brando’s presence is removed, and events become a bit of a jumble. Val Kilmer’s Montgomery, who takes Moreau’s place, is good, but he’s no Marlon Brando.

Ultimately, ‘The Island of Doctor Moreau’ is a thoroughly enjoyable film. David Thewlis (who joined the film after shooting had started, replacing another actor) initially seems miscast as Douglas, but he soon proves himself as the talented actor he is. The same can be said for the various hybrids, most of who really take advantage of the excellent make-up jobs and imbue them with tangible emotion which would be lost if everything was achieved with CGI.

It is difficult to ignore the critical mauling the film received, due in part to a series of unfortunate occurrences behind the scenes. Viewed almost 20 years after its release – and I speak as someone yet to see the original Charles Laughton version, so therefore have no other film to compare this to – I found it hugely enjoyable.