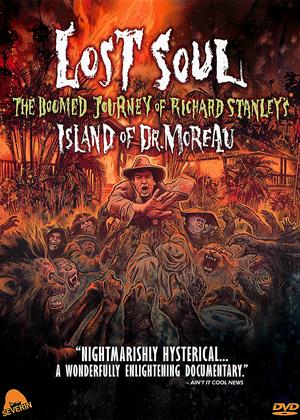 Rent other films like Lost Soul: The Doomed Journey of Richard Stanley's Island of Dr. Moreau

The greatest documentary feature film ever made about the failure of a movie to reach its full potential (or indeed get made at all) is "Lost In La Mancha", the story of Terry Gilliam's doomed attempt to make his version of "Don Quixote", shot by a film crew who happened to be on set making what was intended to be a documentary featurette about the finished movie. Instead, they managed to capture the disaster as it unfolded.

This film is in a different league entirely. Shot two decades after the critical and commercial failure of a truly abysmal adaptation of H. G. Wells' "The Island Of Dr. Moreau" (by far the best version to date is "Island Of Lost Souls" from 1932), it consists almost entirely of middle-aged or elderly people who had some degree of involvement with the movie, mostly very minor, talking about what went wrong, or simply reminiscing about all the fun they had off-set. Richard Stanley, director of "Hardware" (remember that?), "Dust Devil" (you might actually have seen that, but it didn't exactly set the world on fire), and almost nothing else, who was supposed to direct this film but didn't, gets an enormous amount of screen-time to ramble on about his incredibly idiotic New Age beliefs and how unfair it all was, while various other people comment about how great the film would have been if he'd directed it after all, or point out that he was (and obviously still is) a very weird person who simply couldn't handle a major film shoot on the strength of directing a couple of low-budget horror movies and having a friend with magical powers who could fix everything by Sufi voodoo. It should be noted that extras and low-ranking crew members he made friends with on set tend to take the former view, and industry professionals the latter.

Conspicuously missing are comments from actual director John Frankenheimer (who has the excuse of being dead), star Marlon Brando (likewise), and co-star Val Kilmer (remember when everybody somehow thought he had talent?). There isn't even much footage from the movie to illustrate the points being made (though the fact that there are a few brief clips proves there could have been), so in order to fully appreciate this documentary, you'll need to go back and watch a film nobody likes on any level just to see what they're talking about. And while the Australian lady who played The Sow Woman seems like a very nice person, the amount of screen-time she gets just because she was on set only highlights the complete absence of comments from anyone who really mattered. In fact, the only real actors interviewed mostly whine about how their part should have been bigger, or was cut altogether.

It does pick up in the last half hour, when we get to hear some moderately amusing anecdotes about what a bloody awful human being Marlon Brando was and Val Kilmer no doubt still is, but about two-thirds of it is essentially Richard Stanley going on about how great this film would have been if he'd been allowed to make it, despite the complete absence of evidence that he's a genius, while other people who know what they're talking about point out that directors aren't taken off films that are already in production without a very good reason. Overall it's a bit dull, and feels as though it might have been made by a close friend or relative of Richard Stanley. And since nobody really cares about the movie whose failure it documents, it's hard to see why it needed to be made in the first place.

As a novice film reviewer of absolutely no repute whatsoever, I had never heard of Richard Stanley prior to the events surrounding the creation of 1996’s ‘The Island of Doctor Moreau’. When first viewing him here, he struck me as someone who fancied himself a little arty, weird and interesting. Indeed, other crewmembers interviewed for this documentary regularly describe him as being ‘unusual’. My feelings toward Stanley went from that to feeling desperately sorry for him: a director, for whom a series of unimaginable catastrophes lost him his reason. 100 minutes later as the end credits rolled, I found myself liking him a lot, and feeling pleased that the disastrous happenings behind the scenes of the 1996 film didn’t seem to have irretrievably broken his spirit.

In fact, it is with some relief that none of the cast or crew interviewed seemed to remain undamaged, and have not lost their sense of humour, after their experiences recounted in this compellingly documented diary of miss-haps.

For all those interviewed, I was surprised that David Thewlis, one of the main players, was mentioned so briefly – just once, as I recall, with a cursory mention of him being brought in to replace another actor who had grown completely and understandably disenchanted with the shambolic nature of the filming.

The anecdotes range from hugely unfortunate to laugh-out-loud hilarious, as recalled by Marco Hofschneider, Fairuza Balk and Stanley himself, amongst many others, all hugely personable and full of incredible remembrances. It is entirely possible that, with Stanley’s inclusion, and the lack of Kilmer, Brando or replacement director John Frankenheimer (the latter two having passed away), that memories are presented in Stanley’s favour – we’ll probably never know – but the results form the basis of one of the most fascinating and bizarre behind-the-scenes documentaries I have ever seen. It doesn’t matter if you have never seen the 1996 film, I recommend this unreservedly. My score is 9 out of 10.