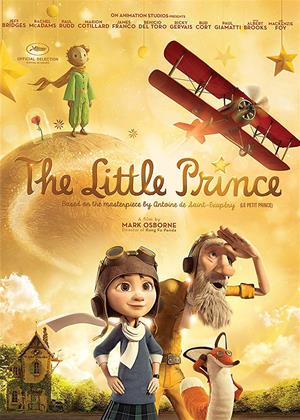 Synopsis:
At the heart of it all is The Little Girl (Mackenzie Foy), who’s being prepared by her mother (Rachel McAdams) for the very grown-up world in which they live - only to be interrupted by her eccentric, kind-hearted neighbor, The Aviator (Jeff Bridges). The Aviator introduces his new friend to an extraordinary world where anything is possible. A world that he himself was initiated into long ago by The Little Prince (newcomer Riley Osborne). It’s here that The Little Girl’s magical and emotional journey into the universe of The Little Prince begins.
And it’s where The Little Girl rediscovers her childhood and learns that ultimately, it’s human connections that matter most, and that it is only with heart that one can see rightly; what is essential is invisible.
Directors:
Mark Osborne
Voiced By:
Jeff Bridges, Rachel McAdams, Paul Rudd, Marion Cotillard, James Franco, Benicio Del Toro, Ricky Gervais, Bud Cort, Paul Giamatti, Riley Osborne, Albert Brooks, Mackenzie Foy, Jacquie Barnbrook, Jeffy Branion, Marcel Bridges, Guillaume Canet, Vincent Cassel, André Dussollier, Florence Foresti, Guillaume Gallienne
Writers:
Irena Brignull, Bob Persichetti
Aka:
Le Petit Prince
Genres:
Anime & Animation, Children & Family
Countries:
France, Anime & Animation, Children & Family

Reviews of The Little Prince

Mark Osborne’s big-screen animated adaptation of Antoine de Saint-Exupery's beloved tale has a strange sense of whimsy for existing outside the usual template of commercial animated film. It does away with the usual frenetic tones of the medium to present a more simple and charming animation about growing up. The story veers off into its own original path, but still respects the source material and its themes as it fuses reality with fantasy and computer animation with stop-motion animation. This is all a rather surprising production from the director of the more fast-footed Kung Fu Panda.

Before delving into the fantastical world of the titular character, the computer-animated portion of the picture focuses on a modern-day little girl, voiced by Mackenzie Foy and simply referred to as The Little Girl. Her summer fun is put on a brutal hold as her analytical mother (Rachel McAdams) forces her to study for the entire season. She’s not some wicked maternal figure that despises childhood - she’s just overly nervous and concerned about making sure her child has the best education. It’s an understandable mindset, but it will ultimately do more harm than she realizes. Naturally, the little girl becomes bored and seeks a distraction. She finds her perfect summer playmate right next-door with an elderly aviator (Jeff Bridges). The old coot occupies his days with fixing up a plane and telling stories. His story of encountering a little prince from space in the desert intrigues her. She wants to hear more. She wants to play with the aviator. She wants to enjoy being a kid before it’s too late.

I was rather intrigued with this unique interpretation of The Little Prince in a manner that kids and adults can identify with. The little girl finds herself struggling to deal with that next step into adulthood, sped up by her absent and controlling mother. If all there is to life is being stuck behind a desk, what’s the point of growing up? While the aviator does make a point to have some fun with the little girl, he also recognizes that she needs to grow up. He sweetly speaks about how growing up isn’t as hard as it seems and that she’ll make a great grownup. As long as you don’t lose sight of your imagination and never forget the days that made life worth living, growing up doesn’t have to be a downer. Such a message is a perfect primer for children and a strong reminder for adults.

The mixing of computer animation and stop-motion animation bodes well for the tone of the picture. The CGI world occupied by the little girl and the old aviator is a stylistically rendered reality. The girl’s strict house is a muted mesh of dull grays and blues while the aviator’s backyard is a colorful playground of greenery and mechanical parts. When reading about The Little Prince, the girl has visions of his stop-motion universe that appears entirely made out of paper. Familiar characters from the book pop up including the shy fox and the babbling rose with a charming cast behind the paper-textured figure. The contrast in worlds gives off a vibe similar to The Neverending Story, especially when there is a crossing of dimensions as the little girl finally meets the little prince.

The Little Prince is both fun and tragic for its focus on childhood imagination and the fear of losing it. The little girl delights in its wonder while the elderly aviator cherishes what little he has left. There’s a certain joy that is lost with age, one that we rarely embrace or admire until it’s too late to indulge. As we grow older, we push away childish things. Sometimes we push them so far we forget what it was ever like to be a child, viewing kids more in the long run of their development than the now of their spirit. There are many animated films aimed at families that remind adults of childhood perspective, but few appear as sobering, heartfelt and majestic as this one.