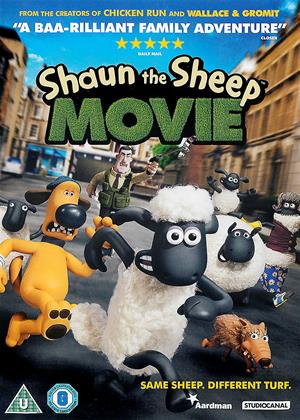 Reviews (3) of Shaun the Sheep Movie

This movie is based around 2 common tropes used countless times in so many stories: 1) the country mouse visiting the city, and 2) a main character suffering memory loss.

Having said that, who said every movie had to break new ground with original ideas?

The film is suitable for all ages (not just little kids) and there are some clever jokes in there for grown-ups too.

The animation is, as to be expected, first class. The sheep characters and the dog ones are good fun.

It's all very sweet and funny, so 4 stars.

2 gripes: 1) why oh why is a sheep called Sean when, by definition, all sheep are female? Sean the Ram maybe? Ronald the Ram? 2) I got a bit sick of the UK portrayed as a place where 60% of people are black/Asian and was offended that they used a woman with a headscarf in this. A shame political 'correctness' even has to infect cartoons these days.

This is a gentle clay animation that is great for anyone from 0 - 140. The story of a bright lamb who wanted to have a break has the Nick Park stamp of excellent animation all over it although he isn't credited. I prefer Wallace and Gromit for character, none of these characters is quite as amusing.

Totally engrossing - Shaun the Sheep Movie review by BE

Usual very high standard from Aardman Productions. Yes, we've seen these funny scenarios before but carried out with such originality and panache by Shaun and company, you can't help but laugh out loud and empathise with the soulful moments. There are so many harsh and unsettling movies around these days, it's a change to watch something so very pleasant. Not a great animation fan but Shaun the Sheep and Toy Story movies are in a class of their own.

Shaun the Sheep is one of Aardman Animation’s most unique feature films in that it’s based on a television series of the same name and doesn’t feature a single line of identifiable dialogue. Such traits might hinder a film - especially an animated one aimed at the younger audiences. And yet they find a way to make it all both innocently fun and devilishly clever. It’s that certain charm that only Aardman can deliver with their trademark claymation. Whereas studios such as Laika have moved on to more intricate levels of stop-motion animation with 3D printed faces and additional CGI, Aardman remains true to their traditional methods. They tried venturing into CGI with Flushed Away and Arthur Christmas, but it’s clear where their strength lies.

The story is simple enough to be told without dialogue, but open enough to be playful. Shaun is the most intelligent of the sheep heard on the farm. He’s the only one that seems to have a desire to break free of the habitual formula dictated by the farmer. The plucky young sheep devises a plan with a fluffy brethren to trick the farmer into falling asleep so the sheep can take a day off from being herded and shaved. They also need to distract the dog Bitzer that herds them - a task easily accomplished with a duck that works for bread. But the plan goes awry with keeping the farmer snoozing in a camper as the mobile bedroom is sent accelerating down the hill and into the city. Shaun takes it upon himself to lead the sheep and loyal dog into the urban jungle to bring back their beloved master.

With no dialogue and naturally no big-name voice actors either, Shaun may be a tough sell and might even pass over the radar of a few parents. But watching this film with my 3-year-old daughter proved that animation is more about cleverness and craft than marquee value. She was entranced to see what the sheep would do next as they discreetly make their way through the city streets. She laughed when the sheep began to mimic the mistakes of humans in a restaurant by spilling water glasses and belching loudly. She cowered when the evil city exterminator cornered the herd at the edge of a cliff. I was surprised at how much she got into it for having no dialogue and one minor musical sequence. At no point did she ever ask me “when do they talk?”

But will the parents enjoy such a simplistic feature? I think they will considering the film features a solid amount of clever references that will go over the heads of kids. While the little ones will enjoy the slapstick nature of this farce, adults can have a giggle from a Hannibal Lecter cat, Bansky style graffiti and Cape Fear esque terror. It has all the wit of the snappiest animated features, but is subtle enough not to blast the screen with too much humor. There’s enough frenetic energy and unique visual gags going on that a blaring voice cast would be too much.

Without all the additional noise, I could really enjoy the style of the claymation. It may drive some crazy the way the sheep only open their mouths on the side with lips that disappear while silent, but it’s those stylistic choices which really make the animation come alive. These little wrinkles in the cloth are pleasant reminders that there is somebody putting physical effort into making something with both an artistic flair and cartoon sensibilities.

For what is essentially an animated silent movie, Shaun the Sheep manages to be an impressive joy for any age. Its universal humor is a testament at how well directors Mark Burton and Richard Starzack can find their way into the heart of even the most jaded moviegoer. There is some crass and danger, but still just as much heart and affection. There are jokes about butts and farts, but never to an absurd degree to rely on such low-brow tactics throughout. It's even a breeze to watch at a modest 85 minutes. This is another brilliant example of how Aardman has pinned themselves as the masters of claymation in the way that Pixar has cornered the market on computer animation.