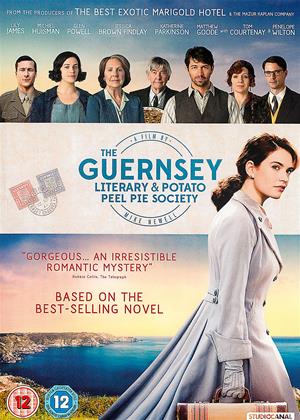 Reviews (17) of The Guernsey Literary and Potato Peel Pie Society

What an excellent adaptation of this popular best selling book.

Exciting love story that is based on historic facts which are sometimes upsetting to hear about, but important to appreciate what the local residents had to endure when the Germans invaded their island in the Second World War.

The acting is first class, as are the locations.

A most enjoyable film - well worth viewing. - The Guernsey Literary and Potato Peel Pie Society review by George

We cannot agree with review number 1, but our reaction to the film was very much as review 2. This did portray life under the Nazis, we were shown slave labour, people were starving, a young woman was shot and always what happened in WW2 was coming back to haunt the characters. We also had the illicit love affair of a local young woman and a decent German officer. She was deported to the Ravensbruck Concentration Camp where she was shot, protecting another prisoner. He was posted, but his boat was torpedoed and he drowned. My wife and I have been to Guernsey and visited the Occupation Museum, which is very moving.

The conclusion was obvious quite early on but that did not spoil the enjoyment which came principally from the strong performances of the small cast of accomplished actors. Loved penny Wilton and Tom Courtenay and Matthew Goode was a marvellous foil for the heroine. Nearly 80 years on,these WW2 dramas are caught between the fast paced, loud rude and digitally frustrating modern world and the innocent costume dramas depicting life over 150 years ago. WW2 War films can still draw an audience but these dramas with heavy Nazi overtones are a turn off to many I suspect, although the film did not try to dwell too deeply on this aspect. The story focussed on the romance with the contemporary setting plausibly explaining the reason for the story. Sufficiently enjoyed and entertained to decide to spend 10 minutes recommending it here

Not such a bad film but NOT Guernsey! - The Guernsey Literary and Potato Peel Pie Society review by PB

I won't repeat what other have said but just add that I was disappointed by the decision not to shoot on Guernsey which has a very distinctive appearance and to give it credit, is pretty well preserved from those days.

If they had, there would have been a greater sense of the claustrophobia that occupation must have brought - Devon made the place seem vast - and the physical structures such as fortifications (both German and Napoleonic) would not have had to be CGI'd in.

I understand that the filmmakers took the 25% tax credit available from HMRC into account.

Amusing that the Guernsey official tourism website does all but claim it was shot on the island. Good for them! Although anyone turning up and hoping to spot shooting locations will have to make do with real history instead.

Nearly a 4, but do tend to go along with the lack of dynamics with the lead characters. No real frisson there. However, well photographed, and once again for Brits, excellent scene production. Amazing detail of streets and homes. Mass of effort gone into that. Plus proficient acting by line-up with no weak links.

A delight to watch this beautifully made drama -- it showed that individuals who put their search for truth as a high priority can succeed!

As twee as its title, this is romantic fiction but lacking in any chemistry between the leads. The dark history of the Nazi occupation of Guernsey is relegated to the background in favour of un-funny 'quirky' characters, pretty scenery and pretty dresses.

I read and enjoyed the book. The film... Not so much.

Firstly, if you're filming a book in which the setting is the star - at least use that setting. I was waiting eagerly for the first shots of Guernsey. Nothing. I don't know why (financial wrangles, I expect) but the movie was NOT shot in Guernsey and that's very obvious to anyone who knows the island even slightly. So I was aleady asking myself why they pressed on..

Secondly, the casting. Lily James is utterly wrong as Juliet Ashton. Everything about her, from the large mouth, the anorexic frame and the diction, screams 2018. And she is too young. It's simply not convincing that she is an established and successful author - with a fat, middle-aged man as her alter-ego. James is, in a word, vapid. I think this is part of the reason her inevitable relationship with Dawsey Adams (Michiel Huisman) is completely unconvincing; he too is pretty vapid. Or, pretty AND vapid.

The movie is almost redeemed by Matthew Goode as Juliet's agent - sharp, gay but still a bit in love with her - and Katherine Parkinson as Isola. She should probably have been playing the lead; presumably, she doesn't have the type of look we cinema-goers in 2019 apparently demand... I also enjoyed Glen Powell's bumptious, if rather clichéd, turn as Mark, Juliet's fiancé.

Incidentally, I have no idea why Dawsey's son, aged about eleven, was present throughout, including at Society meetings. There is only one child in the book, the girl, Kit. Whom Juliet eventually adopts. Why add another, and then have him onscreen for so long? Would a child have been included in a situation that dangerous? It became irritating. Yes, he has a Sad Story about being evacuated, but that could have been covered by Kit. The narration also includes the worst of several anachronisms in the script. I paraphrase, but would a young English boy in the mid-1940s have talked about his mother writing that "...She misses me, but says she can't be with me right now." ?? Boing!!! More cred lost!

I liked the book so much that I badly wanted to love the film. And the fact that I didn't isn't just because it didn't match my personal vision. It let the original down, which a film should never do.

Potatoes were never so enjoyable! - The Guernsey Literary and Potato Peel Pie Society review by JE

An absolutely charming film with the right balance of intrigue, romance, scenery and excellent performances by all. Highly recommended as an “easy watch” film

For me, the most important point the film raised was that not all Germans were Nazis. Sadistic bullies can come from any race.

It was all pleasant enough and without dwelling too much on the plight of either the 'slaves' brought in to construct the 'pill boxes' and the occupied Guernsey residents who were all but forgotten on mainland Britain it packed an historic punch.

The leads were rather wishy-washy but it was eminently watchable.