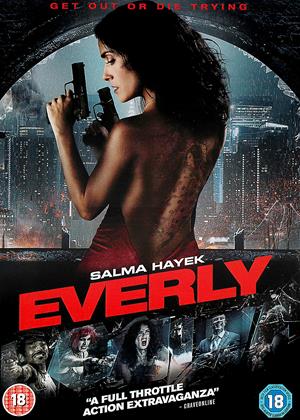 This has got to be the worse film i have seen ,filmed in some ones apartment on a smart phone what rubbish.

Every once in a while there is an action film you just can’t pin down. Everly is one such case where you’re just not sure what it ultimately wants to be. Director Joe Lynch seems to have bought himself a cup at the mix-your-own-action-movie bar and went hog-wild with the ingredients. He throws in everything that includes yakuza, prostitutes, shootouts, snipers, killer dogs, children in danger and sword fights. There is hardly any logical or organic flow to any of this. But, like the best accidents in the kitchen, you can’t argue with the results. Everly turns out to be rather satisfying for a movie that seems to jump all over the map.

Salma Hayek plays the title character, a Mexican hitwoman who just made a lot of enemies. Trapped in her apartment, Everly must defend her life from the Chinese/Japanese yakuza, the corrupted police, a cartel and an extra batch of expert assassins just in case she run out of people to kill. The very first scene finds her bursting from her bathroom with a gun, quickly and efficiently taking out the Asian gangsters in her apartment. Next thing she knows her prostitute gal pals are descending on her apartment room, seeking the bounty currently on Everly’s head. In between all this, she is constantly on the phone making sure her mother and daughter are safe. With nowhere to turn in a corrupt city, she invites them over and tries to keep them both calm and alive as she wages her one-woman war on a complex packed with bad guys.

This action picture is very off-beat in how it switches tones. After Everly mows down a room of gangsters, she finds one is still alive on the couch. She forms a strange relationship with him as she gets the dying man a drink, but snatches it away when he smirks at her pain in cleaning her gunshot wounds. It grows darkly comedic when Everly’s daughter comes to visit and the damaged gangster must maintain his concealing of blood and guts. And for most of the movie, Everly is hiding, caressing and telling her daughter everything will be okay as if the plot of Life is Beautiful fell into the universe of Shoot ‘Em Up.

What follows is a series of gritty, violent and sometimes tongue-in-cheek hilarious deaths. A gangster sends an attack dog after Everly, but she tricks the dumb mutt into fetching a live grenade with the dopey gangster trying hopelessly to remove it before the explosions. A crazy Japanese man attempts to poison Everly’s mother by pouring acid into her mouth, but he winds up getting a taste of his own medicine as his insides melt out of his stomach. The entire picture is just a non-stop array of violence on multiple levels with multiple baddies including samurais and snipers. Of course, the lead antagonist has a thing for Everly and wants to finish her off with a sword fight. He likes to display that cocky sense of honor while Everly just grits her teeth and spits in his face.

If Salma Hayek wasn’t a genuine action star before, she certainly has earned that title with this picture. She goes to extreme lengths in her performance requiring an awful lot of blood and gunplay. In the heat of combat, however, she is still able to deliver on the role of a calming mother in between her dirty dialogue while putting holes in the competition. It’s not exactly a very deep role seeing as how most of her dialogue is a chain of vulgarities, but she plays that part with gusto.

Everly is the type of action movie that throws everything at the screen including the kitchen sink. And the kitchen plumbing with a geyser of blood resulting from removing the pipes. With its femme fatale lead and bombastic violence at every turn, it’s hard to nail just what makes Everly so engaging. Whether its the shock of the over-the-top gore or the tongue-in-cheek nature of the overloaded scenario, it certainly never bores for all its irreverence. If you’re looking for something in the vain of Kill Bill sans the dialogue, Everly is a solid bit of bloody fun.