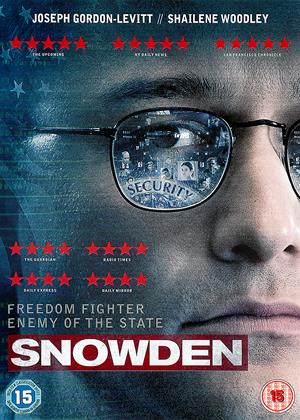 This film is generally rated lower then the pure documentary by Laura Poitras.

I am not sure why, it is a good film, perhaps people who saw the documentary

first are disappointed as it is only actors and not the real people.

(Actually one of the participants does have a cameo). Maybe because it was

documentary scored higher. By the time most people saw the second film

Trump was on the scene and Snowdon was old news. However the problem is

still with us, the US legislature may have enacted some bills, but the

"Security" services pay no heed to the law, they are above it, they are

protecting the well being and lifestyle of the privileged elite. Which

is what they mean by National Security, whatever your view maybe. And UK

is no better than USA in this.

In my view both films are equally good, and need to be seen sequentially.

participants and much of the footage is the actual video shot at the time.

It answers the question "what happened"? This film (2016) is more of a drama

with actors, but is still true to the story, it gives more background and

attempts to answer the question "Why did it happen"? To this end it can only

make suggestions, it is a complex morality question.

It has been suggested that making sensitive documents public, having sworn

an oath to secrecy, is asking for trouble. This naive view ignores the

moral question that all whistle blowers face, to reveal that a crime has been

committed or not. Is lying to congress OK, but proving this to the public

Watched this with my kids, who were riveted throughout. I'm not an expert enough to say how close it was to what really happened, but as a film it is first-rate and: very thought-provoking and compelling to watch.

Perhaps that should be Excellent but not Brilliant!

Seen through the prism of 2019, with Cambridge Analytica, Russian manipulation of US and possibly UK democratic processes, Fake news etc, this film seems terribly dated, and innocent in its belief that exposing truth is always a good thing.

Still, Snowden shocked us into beginning to think more carefully about uses and abuses of information, so is worth marking.

I agree that the film fails rather to capture the high drama of the events that followed the leak, or the bravery of those bringing it to light.

Shame they never kept tighter to actually what happened, rather than introduce a job for Nick Cage etc. Introducing all sorts of soap drama and dialogue, where actual story is better film content.

He did a Tom Hanks Terminal for one month, as US boiled his passport etc.

As he was employee of the government, with official secrets status, and oath sworn etc, the outcome of releasing confidential data was only ever going to go one way!

Nowhere near as tense and thrilling as its documentary counterpart Citizenfour, Snowden by Oliver Stone can still become a source of an entertaining afternoon – but only if you enter the experience with low expectations and/or haven’t yet watched the far superior accompanying feature by Laura Poitras. Main difference is: Snowden cares to explain all successive actions that lead to Mr. Edward Snowden making that final decision that we all know about. Citizenfour on the other hand, jumps in medias res and doesn’t care for anything that doesn’t concern Snowden, his materials, his actions and part of the upcoming repercussions.

If I can go back in time and unlearn some things, I would personally opt for Snowden first, and then Citizenfour afterwards.

For those hiding under a rock, or stuck between a rock and a hard place, or just plainly enjoying rock ‘n roll – Snowden is a biographical drama/thriller about what lead to Edward Snowden’s decision to ‘betray’ the CIA, NSA and bunch of other USA agencies and release a large chunk of confidential materials to the public. Snowden however didn’t want his expertise to bring bias to the equation, so he called few journalists, namely Laura Poitras (played by Melissa Leo) and Glenn Greenwald (Zachary Quinto) in order to decide how best to publish said materials. Snowden himself is portrayed by Joseph Gordon-Levitt, who gives perhaps his best performance till date that highlights his acting skills and leaves nothing to chance. Just as the real-life Edward Snowden, who made sure the files were encrypted and all data transfer was safe from prying eyes.

Snowden is a well-put together film with several nuisances: Snowden’s girlfriend Lindsay Mills (Shailene Woodley) is depicted in a low-light setting – as if she was the dumbest, shallowest person that has walked upon the Earth. She constantly misunderstands general knowledge (in the film) and is downright annoying for one to hear her adolescent banter about love and such. I’m sure the real-life person behind the actress has more qualities than just complaining about first-world problems and misunderstanding her boyfriends’ job and the responsibility he bears.

The film’s best scenes come when the personnel working within NSA’s facilities starts to question real-world moral dilemmas: is it OK if we kill people with unmanned drones? Why if these people were never guilty in the first place? What if, in fact, they were unarmed civilians that merely wanted to cross the street and buy some food? What if they were children, and then the family attending their own child’s funeral? When questions like these are asked, Snowden quickly gets struck down by his epilepsy – a condition that represents both his current mental state, and the chain-of-command inside the government agencies that is impervious to human compassion and empathy toward others.

The agencies themselves are best portrayed via a certain scene involving a senior CIA officer who looms his presence over Snowden and exclaims in a calm manner that his every single move is being monitored by the agency. He also mentions his girlfriend in a context that pushes Snowden over the edge and makes him pull off the final move that would seal his destiny and change his life forever.

Snowden by Oliver Stone offers some insight into how things work within closed doors, but doesn’t offer anything new that we haven’t read, or seen, or witnessed ourselves in regards to the mass surveillance program conducted by the Big Brother that is NSA.

A little too late, but satisfying nevertheless.