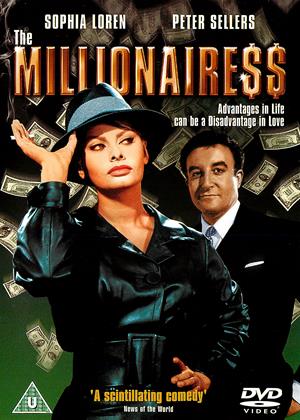 Synopsis:
Spoiled heiress Epifinia is looking for a man in her life, but she is not finding it an easy task as the lucky man not only has to cope with her attitude, but also has to measure up to her gather’s strict expectations, which is that any prospective husband must, from a 500 pounds start multiply his initial investment to 15000 pounds, and this within 3 months! Epifinia however as not having any success in landing her man with the Midas touch. In despair she decides to jump into the Thames but as luck would have it the good Dr. Kabir just happens to be rowing past, and, after some persuasion rows to Epifinia’s rescue.
Little could she have known however, that her handsome beau in a boat had been issued with a similar test of character, as set by his devoted mother. Can they ever measure up to the demands made by their respective parents?
Actors:
Sophia Loren, Peter Sellers, Alastair Sim, Vittorio De Sica, Dennis Price, Gary Raymond, Alfie Bass, Miriam Karlin, Noel Purcell, Virginia Vernon, Graham Stark, Diana Coupland, Pauline Jameson, Eleanor Summerfield, Willoughby Goddard
Directors:
Anthony Asquith
Writers:
George Bernard Shaw, Riccardo Aragno
Others:
Wolf Mankowitz
Studio:
GMVS Entertainment
Genres:
Classics, Comedy, Drama

Reviews (3) of The Millionairess

This film has effectively been banned from TV in the UK. And why? Because the comic genius Peter Sellars has make-up on and does an Indian accent - so therefore, according to PC muppets, it's racist. It's isn't of course, it's mimickry - just like anyone doing any accent or caricature. This film is also much funnier than most comedians' mediocre efforts - whether they be white, brown or black (and that includes the goodness gracious me rip-off merchants). This movie is a classic - but you'll only enjoy it if you take off your self-righteous sanctimonious PC hat and go with the flow!

There cannot be many over the age of 35 who have not seen this. Sophia Loren has a spectacular figure but is not so well endowed with acting skills. Sellers impersonation of an Indian doctor is always going to be funny and Alister Sims is my favourite dry comedian. Dated but a must see classic.

By today's standards, a very average period piece - The Millionairess review by RP

Well, Sophia Loren gets to show off a little of her voluptuous figure, her limited acting skills, and lots of gorgeous Balmain dresses. Peter Sellers proves he is not only a comedian but also quite a gifted actor, most certainly better than La Loren. But the film is most definitely of its time, and the idea today of a white actor playing an Indian doctor would be regarded as definitely not PC :(

The story is of course very stagey and is similar to other GBS plays. Here Dr Kabir is a socialist (that's what La Loren refers to him as, anyway) and a dedicated doctor who runs a clinic serving the working classes. Epifania is a rich capitalist who fancies Dr Kabir and buys up local property and builds a modern clinic to attract Dr Ahmed's patients, but they find it too bureaucratic and return to him. In her plan to fulfil the terms in her father's will, she gives Dr Ahmed £500 (which he promptly tries to give away), at the same time she spends 35/- (=500 rupees) building a pasta making sweatshop into a successful business in an attempt to prove she is worthy of Dr Kabir's mother's wishes. All ends happily of course and capitalist and socialist declare their love.

The film was successful and spawned the hit comedy song 'Goodness Gracious Me', which doesn't appear in the film.

None of that answers the question, is it any good? Well, the GBS play wasn't very successful when first performed but was successfully revived in the 1950s. There are liberties taken in the film (eg in the play the doctor was Egyptian, it was a garment sweatshop etc etc ). The film is an interesting period piece, but hasn't aged particularly well, and doesn't show off the talents of its main characters to their best advantage, nor any of the array of stalwart British character actors who appear, of whom Alistair Sim is the best.

It's worth seeing, but it's pretty average stuff - and far too stagey. 3/5 stars.