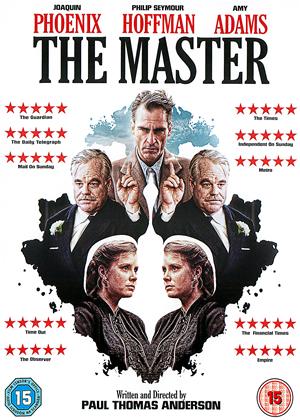 Reviews (7) of The Master

One for the grownups - The Master review by CP Customer

Having lately sat through a series of thrillers and the occasional rom-com that were essentially made for children, or at least teens, it was good to encounter a film made with adults in mind.

Everything is unsettling about this film, from the semi-classical score to many of the camera angles that look up from the floor, placing the viewer in the position of a lowly acolyte in Philip Seymour Hoffman's cult. There's a ravishing shot of a lighted pleasure boat steaming under what might be the Golden Gate Bridge into the last of a sunset, but otherwise the camera work is fairly static.

The two leads are terrific. Phoenix holds himself like a gorilla that's learning to be a man, his arms stiff and his shoulders forward- (I bet they had a chiropractor on the set), and Hoffman morphs from genial father figure to snarling tyrant in nano seconds. Phoenix sometimes sounds like Brando, while Hoffman seems to be channelling Orson Welles, but there's nothing wrong with that. There are a couple of other nods to Citizen Kane, when the Hoffman character addresses his faithful, and later when Phoenix visits him in the English school he sets up.

I disliked There will be Blood intensely, finding it pretentious and shallow, but I loved Magnolia, so for me, this is a return to form for P.T.Anderson. Like most artists and fine craftspeople, he doesn't churn 'em out, so I'll have to wait patiently, but eagerly, for his next film

Different and brilliant - The Master review by PT

OK this is not going to be everybody's cup of tea I appreciate. Having said that I thought it was phenomenal, so glad I seen it. The acting by the 3 leads, namely, Joaquin Phoenix, Phillip Seymour Hoffman and Amy Adams is truly exceptional. Phoenix has never been better, he actually looks like an insane alcoholic, really embodying the part. Hoffman is outstanding as the charismatic master, amiable one minute then overly aggressive the next. Adams is superb as the dutiful wife, totally committed to the cause. Loved the soundtrack and cinematography. In short I salute Paul Thomas Anderson as I think he has made a masterpiece here.

Could not watch this film all the way through. A waste of a rental. The theme is basically sex and you can't identify with any of the characters - they're all totally unlikeable. the 'master' isn't one either !! Rubbish!

I wish I had seen the (only) review instead of relying on the synopsis there's a laugh. It is one of the worst films I have seen for some time. I had some sympathy for the two male leads who struggled with a nebulous story and in the end I gave up before it finished.Little attempt to hold an audience apart from gratuitous nudity and sex and maybe a passing wave to scientology.

Perhaps the Venice Festival is some kind of backscratching contest?

Frustrating near miss of a 'masterpiece' - The Master review by BS

Oh god I wanted to love this film. It has my two favourite actors in it. It is a fascinating subject matter, and a fascinating premise. It is beautifully shot (the opening 30 minutes is some of the most subtly stylish cinematography you will ever see)... but... God it was tedious. Shame shame shame.

The Master-piece - The Master review by BE

A thoroughly absorbing and engaging movie with two of America's finest male actors at the helm tackling an unusual subject matter. Joaquin Phoenix was truly outstanding (although was not awarded the Oscar he deserved for his performance).  Phillip Seymour Hofmann also gave his expected excellent performance and proves what a sad loss to the world of acting his demise was.   To be revisited.

Pretentious waste of time - The Master review by JZ

This doesn't enlighten nor entertain.. truly not enjoyable and the acting or camera work cannot compensate when you've fallen asleep on the sofa.. and I'm a discerning intellectual film watcher! After sitting through it I had to then watch something else on TV to cleanse my mind of it.