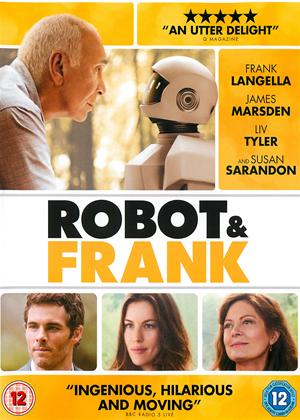 Reviews (5) of Robot and Frank

I really enjoyed this film. It's genuinely funny, in a cartoonish way. It is well-written, with some funny lines.

Set in the near future, its robots are believable if one suspends disbelief - but the music in one sequence certainly isn't - and nothing ages so fast as a vision of the future.

Some funny lines about libraries made me laugh out loud (well, we do live in an age of 'learning zones').

One has to suspend one's disbelief a lot for this - but the film is genuinely enjoyable and funny. Not too long - but with a silly subplot (about an ex-wife) which is utterly unnecessary and unbelievable. Despite that, it's well worth 4 stars - and the lead actor is perfectly cast, and the robot's dialogue is utterly believable. Good fun.

We enjoyed this film, set a little bit in the future, the son of a man with memory problems gives him a robot to help around the house, (I must have one). A thief for most of his life, the man trains the robot to pick locks and help with break ins. The end of the film is quite moving.

Missed the button! - Robot and Frank review by BE

This one did not quite hit the button with me. The robot looked like a person inside robotic attire, every now and then losing his staccato movements. I also found the setting quite gloomy. The story line was okay but I think others would possibly enjoy this movie more than myself.

Good fun but, be prepared for heartstrings to be tugged. - Robot and Frank review by Bullitt 68

A fun and different as well as interesting take on A.I.

I cannot wait to watch it again and recommend it.

This is an enjoyable and easy to watch film, and is something slightly different from the norm with it being set in the near future.

It’s relatively funny in places and easy to follow with a storyline that isn’t taxing but is effective. The relationship between Frank and the Robot is endearing as it builds to an end that is rather touching in a way.

Nothing amazing, just a good film with a different plot, that’s worth a watch.

In a world with the ability to increase the normal human lifespan almost inexplicably more and more families and individuals find themselves affected by the problems of an aging mind trapped within a medically healthy body. I know I am not the only person to witness’s family members and loved ones deteriorate into states of confusion, memory loss and anxiety because their brains are beginning to malfunction – yet it is taking art and culture a while to catch up with this personal and social trend of experiences.

Robot and Frank, the debut film from director and screenwriting duo Jake Schreler and Christopher D. Ford not only manages to sensitively address the situation but also manages to soften the blow with a light comedic overtone that eases one into the story like the steam from a warm bath.

Frank (Frank Langella) is an aging cat burglar and jewel thief whose short lived marriage and stints in prison have prevented him from maintaining very strong familiar relationships, when his memory begins to fade therefore his children, a son Hunter (James Marsden) and daughter Madison (Liv Tyler) take it upon themselves to intervene. Though unable or unwilling to offer their own personal services a decision is finally made by Hunter, who invests in a futuristic robot butler and housemate for his father who is tasked specifically with helping Frank bring his memory and brain acuity back up to scratch. The habits of the old thief seem somewhat reluctant to die however and despite his initial displeasure at the arrival of his new robot companion a relationship blossoms between them and Frank soon finds his brain activity and memory improving as he and the robot begin planning and executing heists of their own.

The sweet relationship between Frank and the robot, voiced perfectly by Peter Sarsgaard, lies at the core of this warm and whimsical comedy; though its story is helped along by a handful of supporting performances from Tyler and Marsden as Frank’s children, Susan Sarandon as the local librarian Jennifer and Jeremy Strong as the villain and local millionaire Jake.

The finale of Robot and Frank has been praised by most, and I must admit I thought it was the perfect conclusion, albeit a little sad, however I could not help but feel as though it was all a bit predictable, the smooth running of the story distracting from the multilayered relationships of the characters and preventing the actors from truly flexing their performance muscles.