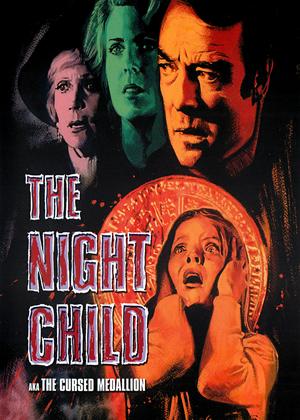 Reviews (1) of The Night Child

Effective, but really a pale Exorcist imitation. - The Night Child review by NP

One of the things I love about European horror and giallo films is the scenery. To tell the truth, it might well be my only chance to see such exotic foreign locations, especially as they appeared over forty years ago. And here, Director Massimo Dallamano makes sure we get the full benefit of exotic looking vistas in Spoleto, Villa Parisi, Palazzo Chigi and London. It looks stunning.

The cast is terrific also. Leading man Richard Johnson as Michael Williams is charming and reassuring, whilst never drifting into the foppish tendencies of many handsome male actors from this period. Prolific Nicoletta Elmi is Emily Williams; here, at just 11 years old, the talented youngster had already appeared in such films as ‘Who Saw Her Die’ alongside George Lazenby, Mario Bava’s ‘A Bay of Blood’ and ‘Baron Blood’, Dario Argenta’s ‘Deep Red’ and the notorious ‘Flesh for Frankenstein’ amongst many other projects. Her role here is big ask: as ‘the night child’ she has to carry large parts of this story, and without the aid of the make-up, special effects or prosthetics that ensured Linda Blair in ‘The Exorcist’ gave us all nightmares.

And this is very much an imitation of that ground-breaking demonic horror. Williams is a film-maker making a documentary about Satanic deaths, and as he is away working, Emily’s behaviour becomes alarmingly petulant: almost as if she is possessed. Thus, we get regular flashbacks and nightmare sequences. Whereas Regan in ‘The Exorcist’ injures herself with crucifixes, vomits green bile and utters foul profanities, Emily throws a few tantrums (and smokes a cigarette) that are energetically performed but hardly terrifying.

The truth is, this is a rather pale imitation of that earlier film and in any comparisons, comes a distant second, despite all the wonderful scenery and powerful performances. It’s true to say that Emily’s powers become more fearsome as time goes on, and the finale contains a good twist. The accompanying score, by Stelvio Cipriani is also completely bewitching, but unlikely to give anyone the jitters. My score for this is 7 out of 10.