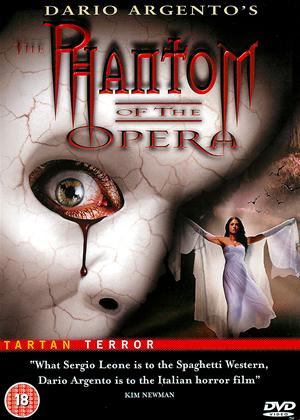 Synopsis:
Gaston Leroux's celebrated Gothic tale of bloody revenge and unrequited love is given a stylish and bloody re-working by Dario Argento, the Italian maestro of horror and suspense. Abandoned as a baby and raised by the rats that dwell in the winding sewers beneath the bustling Paris streets, the shadowy figure of The Phantom (Julian Sands) stays hidden from view. Taking the lives of those who threaten the peaceful existence of his adopted subterranean family, The Phantom haunts the Paris Opera House, leaving a bloody trail of bodies in the cavernous depths beneath the majestic building.
However, when he glimpses a beautiful young woman (Asia Argento) who dreams of becoming a great opera singer, The Phantom is infatuated. Intent on luring her into his underground lair, he sets out to seduce her. But will his unusual existence and the legacy of brutal killings scare her away?
Actors:
Julian Sands, Asia Argento, Andrea Di Stefano, Nadia Rinaldi, Coralina Cataldi-Tassoni, István Bubik, Lucia Guzzardi, Aldo Massasso, Zoltan Barabas, Gianni Franco, David D'Ingeo, Kitty Kéri, John Pedeferri, Leonardo Treviglio, Massimo Sarchielli, Luis Molteni, Enzo Cardogna, Antonio Pupillo, Domenica Coppolino, Zsolt Anger
Directors:
Dario Argento
Writers:
Gaston Leroux, Gérard Brach
Aka:
Il fantasma dell'opera
Studio:
Tartan
Genres:
Horror
Countries:
Italy, Horror

Rent other films like The Phantom of the Opera

Reviews (1) of The Phantom of the Opera

Strangely enjoyable - mild spoilers follow. - The Phantom of the Opera review by NP

Dario Argento’s daring interpretation of Gaston Leroux’s famous horror/tragedy/romance foregoes the traditional disfigured character of Erik (the absence of mask makes a nonsense of the DVD cover and promotional blurb), the Phantom. Instead, Julian Sands plays him as a handsome, tortured, long-haired whisperer unexplainably raised … by rats. It is a curious development. Instead of being ugly to look at, he is ugly in the way he deals with anyone who gets in his way, or in the way of his relationship with Christine Daaé (Asia Argento). Also, of course, the film is robbed of one of its previously defining moments: the unmasking scene and reveal of the cruelly misshapen mass beneath.

So is it political correctness that informs the lack of scarring? Good grief no, for we have much nudity, horrible things done to rats and the overweight, not to mention the rat catcher himself and comedy dwarf side-kick. We have a telepathic Phantom who instantly falls in love with Christine, and she falls instantly in love with him too. With all the eccentrics around him, Erik is saved from becoming the least interesting character by the great and violent rages he displays, at one point raping Christine, for which she appears to forgive him.

Production-wise, this is an impressive gala of colour and spectacle. Certain scenes in which the camera flies around the spacious theatre remind me of James Whale’s joyful exploration of Frankenstein’s laboratory during the creation of the monster’s Bride in the 1935 classic. The murky catacombs where bad things happen to ne'er-do-wells, the expanse of the theatre and the Phantom’s lair, all look wonderful and are effectively lit.

‘Tonally’, as the phrase goes, ‘this is all over the place.’ Despite some very exuberant singing miming, Argento’s Christine is a naturally played beauty, yet most of those around her are grotesques. The awkward sex-scenes don’t do much to convince us of the central love and romance. And yet, this is bizarrely enjoyable. Lots of silliness, some moving moments and mixed interpretations of gore. A fine central performance from Sands, in a look that occasionally invites unfavourable comparisons with 80’s wailer Michael Bolton; an array of special effects, sometimes convincing, sometimes not so much, and a strangely distressing ending involving a cavern full of heartbroken rats.