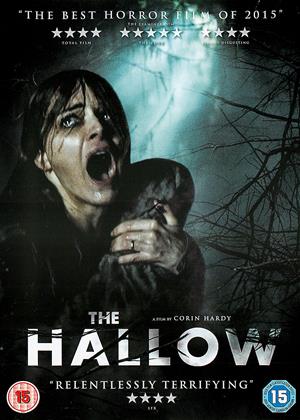 Reviews (2) of The Hallow

Adam Hitchens (Joseph Mawle) is a bull-headed British conservationist. Despite pleas from his wife Claire (Bojana Novakovic), he refuses to meet with the perpetually angry local Colm, (who warns that the surrounding woodland is a dangerous place) and instead leaves her alone in the house to face him when he calls – and then loses his tempter when his wife suggests leaving. His solutions to the growing unease often worsen the situation – and yet without such a headstrong (and sometimes misguided) character, there would be nothing to fuel the spiralling nightmare that makes this film so enthralling – and it is fair to say, he pays for his stubbornness.

The Irish setting is beautiful and expertly shot; it’s surprising how somewhere so idyllic can be made so menacing. There is an overuse of ‘baby’ in this – fair enough, the ‘faery’ creatures have reputations as being baby-stealers, but there’s a serious over reliance on baby chirping/grizzling/squealing here. If you are not enamoured of infants– as I am not – then this could serve to undermine some scenes.

The bulk of the tragedy befalls Adam’s charming wife, and she spends most of her time trying to protect her admittedly cute son Finn from the many and varied threats to snatch him by briefly glimpsed creatures from The Hallow, which is what the superstitious villagers call the surrounding forest. The special effects are extraordinarily good, but are never – whether CGI or otherwise –allowed to overtake the very human horrors that gradually unfold.

The acting is excellent, not a wrong note throughout. Michael McElhatton is very good as Colm Donnelly, not once falling into the stereotype of the ‘superstitious villager’, just someone who is fearful of the real danger surrounding them all. It’s surprising how small the cast is – it is mainly a two-hander involving husband and wife (with an appearance from Michael Smiley as a reassuring policeman). And when Adam himself shows harrowing signs of becoming afflicted by the encroaching mud and mutation prevalent in The Hallow, things become progressively more desperate.

And yet, it is when the infant is infected that true horror manifests. Possibly one of the things that made ‘The Exorcist (1973)’ so notoriously disturbing was that demonic events happened to a child. When you see a baby become fiendish and wraith-like, it’s surprising how it disturbs. This film knows how to push the right buttons and does so very well.

I enjoyed this , kept me interested throughout. Creepy in places of things in the woods that don't want to be disturbed.