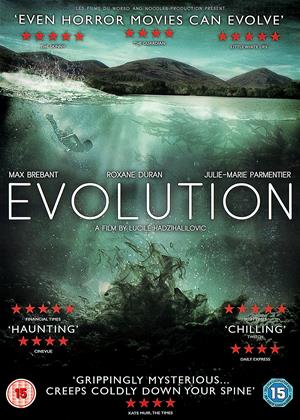 Synopsis:
10-year-old Nicolas lives with his mother on a remote island, in a village inhabited solely by women and young boys. In a hospital overlooking the ocean, all the boys are subjected to a mysterious medical treatment. Only Nicolas questions what is happening around him. He senses that his mother is lying to him, and is determined to find out what she does with the other women at night, on the beach... What he discovers is the beginning of a nightmare into which he is helplessly drawn. But in Stella, a young nurse at the hospital, Nicolas finds an unexpected ally.
Actors:
Max Brebant, Roxane Duran, Julie-Marie Parmentier, Mathieu Goldfeld, Nissim Renard, Pablo-Noé Etienne, Nathalie Legosles, Chantal Aimée, Laura Ballesteros, Eric Batlle, Mafer Blanco, Anna Broock, Celestino Chacon, Annie Enganalim, Silvia Ferre, Imma Ferrer, Ulrika Garcia, Magdalena Komárová, Mireia Leon, Hugo Lopez
Directors:
Lucile Hadzihalilovic
Writers:
Lucile Hadzihalilovic, Alanté Kavaïté
Aka:
Évolution
Studio:
Metrodome
Genres:
Drama, Horror
Countries:
France, Drama, Horror

The opening scenes should've been my warning to hit 'eject'. - Evolution review by AM

'Boring' is usually a poor word to use when writing a review as it tends to implies a childishness or lack of sophistication in the reviewer, but with this film, I'm afraid no other word does it justice. Brain-crushingly, life-sappingly boring. The film's only redeeming feature is that it is so short.

From the opening scenes I got a sense that this film was going to be all about the cinematography and precious little else. Arty, pretentious, stereotypically French, drivel, with loads of over-long lingering shots of the sea, waves, seaweed, etc, etc . My wife and I absolutely hated this film and only saw it through to the end in the vane hope that something, anything, interesting, would happen. The last scenes did promise some of that, but then it just ended suddenly and poorly (as we knew it would). Films like this never have clever, polished endings. They just 'end', as if the reel ran out and nobody could find a new one to continue.

If, on the other hand, the long lingering shots of the surroundings were there to convey the dullness of life for the children on the island, then it did succeed in that regard. Don't get me wrong, I love looking at the sea and I could happily view scenes like this as an aid to relax or sleep, but NOT as a film, goddammit!

Oh lordy, I really hope cinemaparadiso never send me anything this awful again. Please just pass this one by, you'll have missed nothing. You have been warned.

The best thing to say about this film is that it looks good - like a pop music video, in fact. More vignettes than a proper story.

It's all rather confusing and vague, maybe meant to be ambiguous.

No idea if this is based on a novel, but if so, I'd love to know which one so I can look up what it's meant to be about!

Some strange volcanic island populated by mutant women who make boys pregnant - or something. Why is never explained. Your guess is as good as mine.

A dark mood piece marketed as horror but more disturbing than horrific. Its lack of narrative thrust, together with overlong static shots of expressionless faces, makes it a slow burn that requires patience to watch. But it certainly has imagination to spare. A group of odd women live on a wave-swept rocky island with their ten-year-old boys, who are subjected to mysterious medical operations. It’s an intriguing set-up but the plight of the boys, only one of whom exhibits any semblance of an expression at all, fails to make us care. Only the mystery remains to hold interest and you know that’s never going to be fully resolved. Not a patch on the writer/director Lucile Hadzihalilovic’s equally mysterious but wonderful Innocence.

Boring strange rubbish turned of after 15 mins watched to end next day out of curiosity but sorry I bothered.

I really enjoyed this but I'd say that I didn't expect it to be so horrifying, but then I have a deep-seated fear of things from the sea probably thanks to reading too much Lovecraft. If you saw Hadzihalilovic's last film Innocence (2004) then you'd have known what to expect - very short on narrative and character development but rich in allegory and symbolism. It's relatively short and that's probably in its favour. This type of art cinema is in short supply in this day and age so I'm glad this is out there.

A little gem. Stylish, subtle and respectfull of the audience, too often treated like idiots to be spoonfed these days.