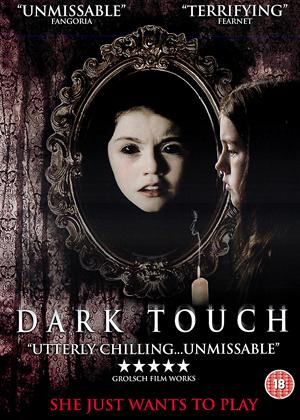 ‘Dark Touch’ is very much open to suggestion. We are left with the impression of what is going on, but allowed to be certain of nothing. Young Naeve may well be abused by her parents, she may well have caused the conflagration that killed them. It is likely that she has some empathic understanding of other abused children, and it seems that they combine their unspecific telekinetic powers to gain a brutal kind of revenge.

Naeve seems both terrified of and embracing of her powers. Her parents and those who try ham-fistedly to understand her exchange meaningful glances with one another, but nothing is really said and no true progress is made.

‘Dark Touch’ is mostly filmed in stark, cold colours and visually contains many elements typical of horror films, of hauntings, and themes of possession. And yet this variant of (disturbing yet fantastic) themes is coupled with the (very real and abhorrent) subject of child abuse, which makes it difficult to categorise. Not that categorising a film is necessarily a desirable thing to do; often films that blur the line between subjects are very effective, but the approach often means that thematically, too many subjects are explored and none in satisfying detail for them to be truly effective.

Dark Touch unlike many of the horror films today is about a real life horror, something we choose to ignore or only talk about when we are presented with it or find out in some happenstance way. That is what makes Dark Touch so impressive, it uses our own fears about the subject and weaves them into a dark and scary tale that has more than a few genuine scares.

The film follows Neve (Missy Keating), a young girl who finds herself being haunted by something or someone. When she survives a horrific attack on her and her family by an unknown force she is left alone with only the kindness of strangers to help her. However when she thinks she has escaped to a kind of safety she is presented with more darkness, this time seeking her.

Director Marina De Van understands the dark soul of the film and also how to elicit scares from minor and major moments. She creates a sense of tension while discussing the darkness of child abuse in a new and totally unexpected fashion. The scares may be what you watch for but by the end you will be thinking about a different kind of darkness.

Keating makes Neve an interesting and complicated character to follow as you try to decipher why this is happening but the film is really about the little things, the well thought out direction, the detailed and grounded story and the over the top gore all add to this sense of impending doom and the chaos that has been caused by the mistrust from Neve’s life.

Ultimately this is top notch horror from a director that understands how to make us relate to it, if even by understanding. Dark Touch is a depressing yet captivating watch into the mind of the young and the disastrous effects that manipulating the young can have on those people they encounter in the future